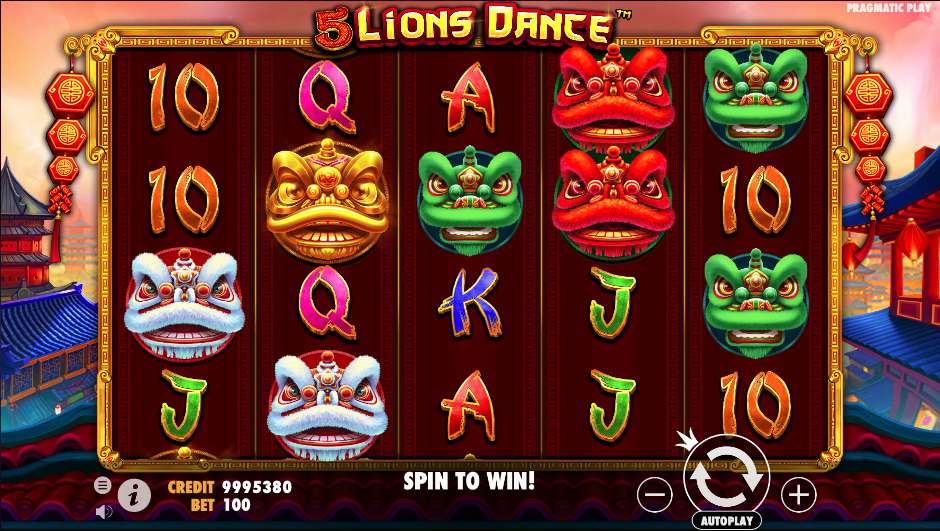 A trip to the ancient land of China awaits those online slots fans keen to try out this animal-themed game from Pragmatic Play; it’s called 5 Lions Dance and from £0.20 per spin it tempts players with two exciting bonus features.

5 Lions Dance is a five reel slot with four rows and 1024 ways to win; banners swing from the top corners of those reels which float against a backdrop of red and blue tiled roofs in this traditional Chinese setting.

Five lions in various colours – gold, blue, red, yellow and green – make up the high value symbols while 10, J, Q, K and A represent the lower values. The gold ball is wild, it appears on reels two to five and it will replace everything except for the drum and Lion Reel scatters to help form winning matches.

This is triggered by landing three of the Lion Reel symbols anywhere on reels three, four and five; reels one and two will now only display multiplier values between 5x and 200x and you’ll get one free spins with this configuration in which to (hopefully) land a big win.

landing at least three of the drum bonus symbols anywhere in view will award an initial ten free spins but these can be retriggered in the same manner an unlimited number of times. During this round, after any wins have been paid, any lions which land will transform into a different lion which may result in another win.

5 Lions Dance is an enjoyable, entertaining and colourful affair which mixes traditional aspects of Chinese culture with the spinning reels to excellent effect; the big wins are of course to be found in the two bonus features.