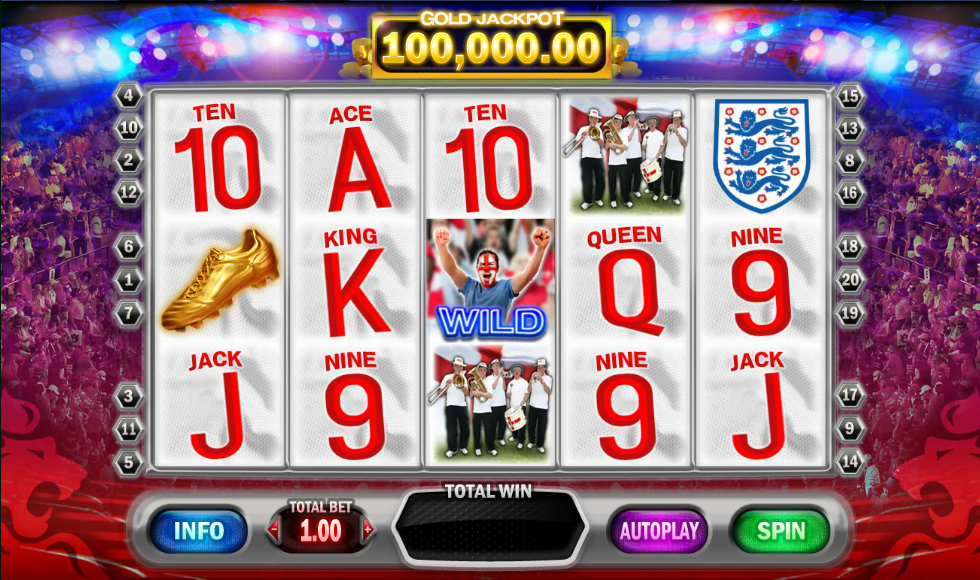 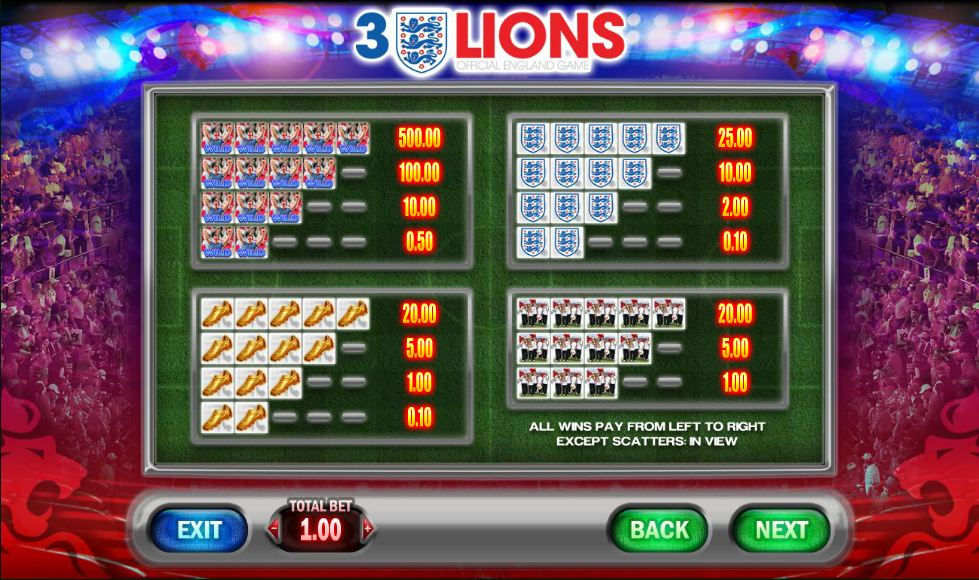 When the soundtrack to ‘The Great Escape’ is accompanying your gameplay then you know the theme is football and this online slot in particular is based on the England team and it’s supporters; it’s called 3 Lions, it coms with a progressive jackpot and you can read all about it below.

3 Lions is a five reel slot with three rows and twenty fixed paylines; those silver-rimmed reels spin against a backdrop of a stadium crowd with the progressive jackpot total displayed at the top.

There are three theme-related symbols including the England badge, the golden boot and the England supporters band; 9, 10, J, Q, K and A are the lower values and they are designed as the numbers on the back of a football shirt.

The cheering supporter is the wild symbol and he’ll substitute for all others to form winning combos except for the girl, trophy and ball bonus/scatter icons. The wild will also double any wins to which it contributes.

This is triggered by landing three of the football bonus symbols anywhere in view; now pick from one of the ten football shirts displayed then pick two more to eliminate; you will be offered a certain number of spins and you can accept them or take what’s behind the first shirt picked. Between 5 and 50 spins are available.

More bonus symbols will appear on the reels during this round which means it’s also possible to trigger the other features from here.

Road To The Final

Trigger this by landing three of the trophy symbols anywhere in view; as you can see from the video above you must now spin the dice to move around the board, collecting multipliers, trophies and golden balls on the way. Collecting three trophies will access the Cup Final where bigger prizes are on offer. When the other player catches up with you you get to play the Ref’s Decision which will allow you to continue or end the round.

This is triggered by landing three or more of the girl supporter symbols anywhere in view and this is a picking round in which you should choose one of the five girls to reveal a multiplier award of up to 500x your total bet.

There are three ways to win the progressive jackpot:

The graphics may be a little basic in 3 Lions but this is an action packed slot with regularly triggered bonus features; you may want to give it a miss if you’re not an England supporter though.