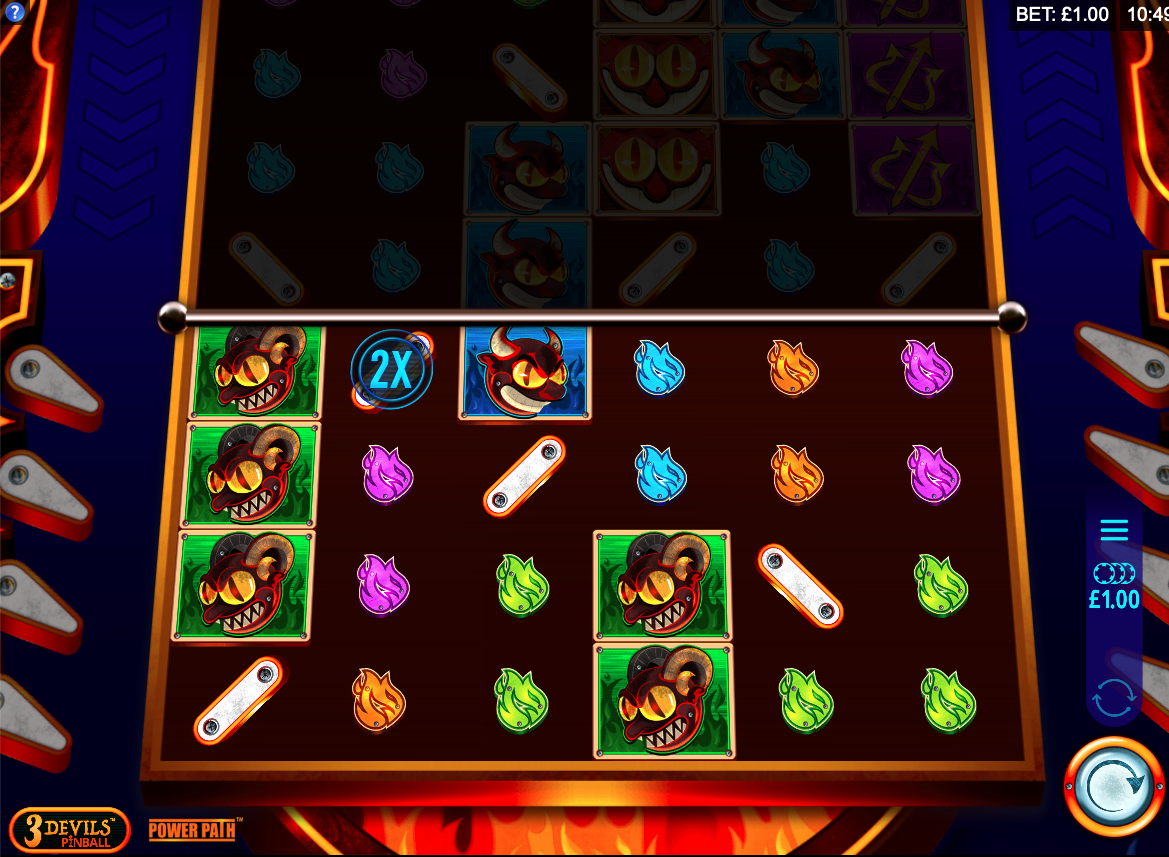 Combining an online slot and a pinball machine certainly sounds like the recipe for something interesting so we’re pleased tombs able to introduce 3 Devils Pinball, this fiery release from Microgaming/Crazy Tooth Studios; from £0.20 per spin it tempts players with wild multipliers and two pinball-themed bonus games.

3 Devils Pinball is a six reel slot with four rows and twenty five paylines in the base game; four flippers flank the reels on either side and there are extra rows above just waiting to be activated.

Note that wins can be formed anywhere on the reels – they don’t have to start on the left hand side. Bumper symbols are worth nothing.

The higher value symbols include various devil faces complete with glowing eyes plus his trident; fireballs in green. orange, blue and purple represent the lower values. There are two wild symbols – the blue swirl and then the ‘2x’ which doubles and wins it helps with; the red chevrons are the scatter symbols.

This bonus is triggered randomly on any spin and the playing area will change to show and activate the extra rows at the top, increasing the number of paylines to fifty.

At least one pinball will now launched across the reels, leaving a trail of wild or 2x wild symbols in its wake as it hits the bumpers (this is Crazy Tooth’s Power Path feature), after which any payouts are evaluated.

Landing at least three of the chevron scatter symbols anywhere in view and you’ll get to play the feature four times; credit values are first added to various positions on the reels and each round sees a pinball fired on the reels, winning any prizes which it passes through. Prizes may be multiplied by up to 5x and the round ends when the fourth ball has completed its journey.

We can see plenty of potential for more pinball action integrated into slot machines but 3 Devils Pinball is certainly a good start – the Pinball Feature seems to hit regularly but the bigger wins are in the main bonus round.

3 Devils Pinball is a pinball-themed six reel slot with four rows and twenty five paylines in the base game.

The Return To Player percentage for Diamond Blast Zone is 96.70%.

Where can I play 3 Devils Pinball then?