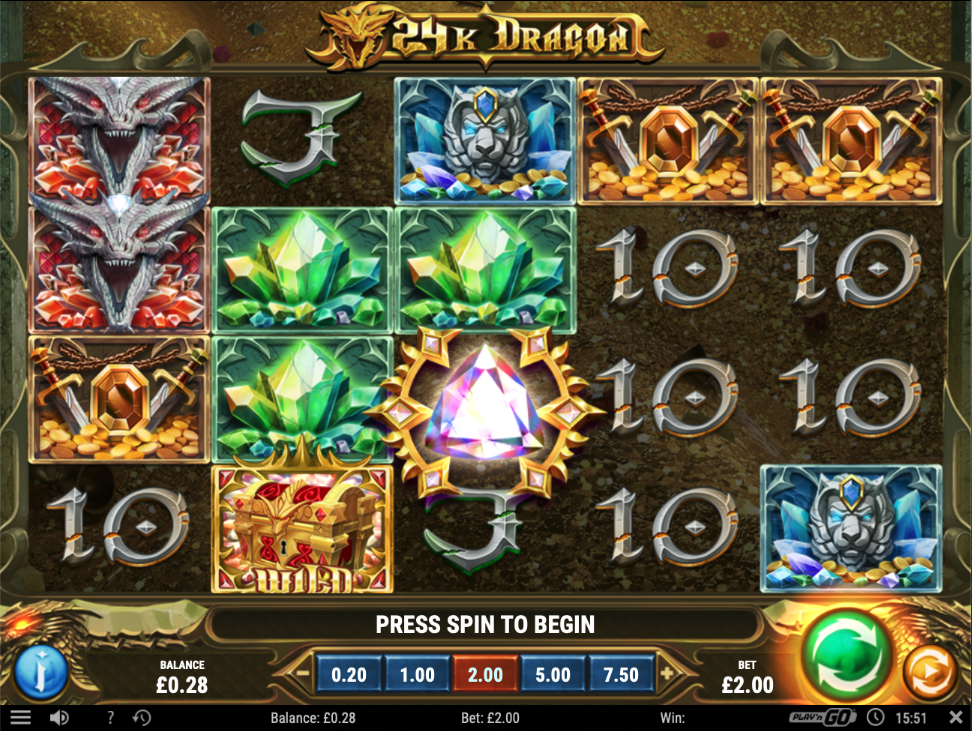 Dragons always add a little excitement to any online slot machine and here we have one more of that theme to add to this genre – it’s called 24K Dragon, it’s developed by Play N Go and it tempts players with free spins, wild multipliers and the 24K Respin feature.

24K Dragon is a five reel slot with four rows and an initial 1024 paylines; a huge pile of hoarded gold sets the scene behind those reels, reminiscent of Smaug’s treasure in Tolkien’s The Hobbit.

High value symbols include gold and silver dragon heads, a pile go gold coins and swords, a green jewel and a stone tiger head; 10, J, Q, K and A represent the lower values. The treasure chest is wild and the large diamond is the scatter symbol.

The golden dragon heads come into their own during this round because each one that lands on reels two, three or four will increase the height of that reel by one row, up to a maximum of eight rows. With all three rows at their maximum level there’s a potential 8192 paylines.

If the wild treasure chest appears on reel three it can also display a multiplier of up to 60x which will be applied to any wild win.

Landing a golden dragon head in the base game will expand reels two, three and/or four by up to four rows for one free respin.

24K Dragon is one more entertaining and enjoyable dragon-themed slot machine and Play N Go have added a bit of creativity here with the expanding reel feature; the animations are great and really add to the exciting atmosphere.