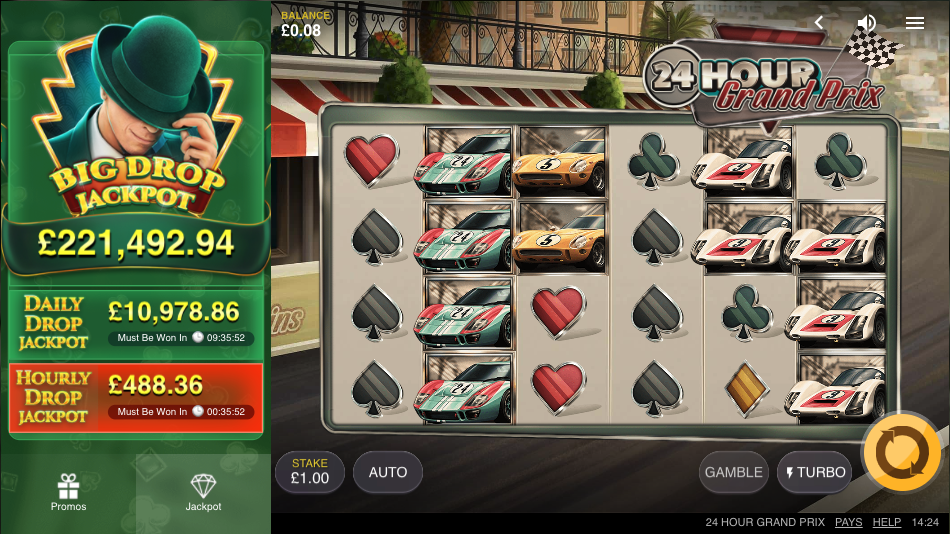 24 Hour Grand Prix is a six reel slot with four rows and thirty fixed paylines; we’ll have a guess that the city we can see behind those reels is Monaco, a location no stranger to Grand Prix and assorted rallies.

The five higher value symbols are classic endurance cars in blue, red, white, yellow and green while playing card symbols make up the lower values. Wild symbols are created as one of the bonus features described below and the scatter symbol is the Race Spins logo.

If you can fill two neighbouring reels with matching car symbols then they will transform into a large, 2×4 wild, effectively turning both reels completely wild.

This is the free spins round and it’s triggered by landing three, four or five of the Race Spins logos anywhere in view for which you will receive ten, fifteen or twenty free spins respectively. During this round all low-paying symbols are removed from the reels, making big wins and the Super Wilds feature more likely to occur.

24 Hour Grand Prix does a good job of bringing the atmosphere of historical car racing to the spinning reels; we particularly like the Super Wilds but the free spins and progressive jackpots are very welcome also.