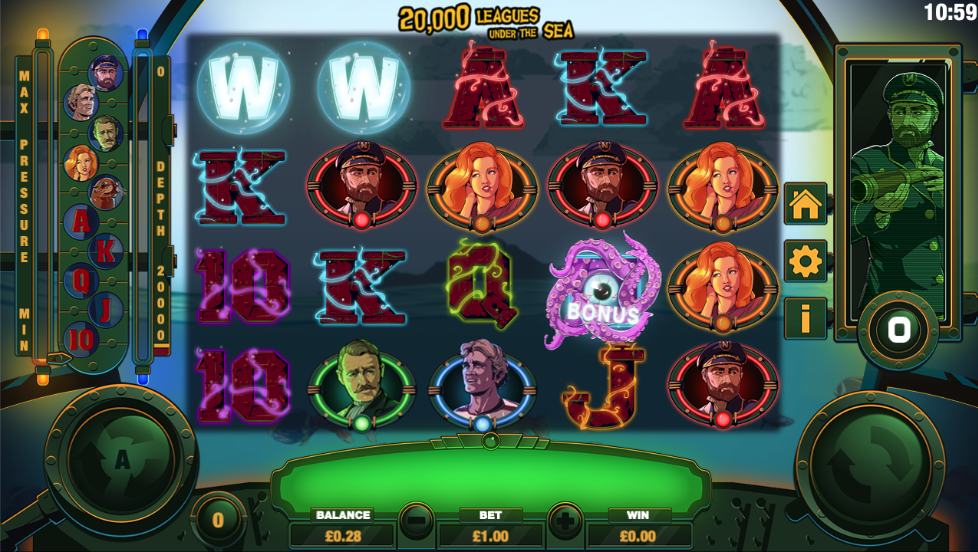 20,000 Leagues Under The Sea is a five reel slot with four rows and 1024 ways to win; the reel spinning action takes place in the submarine’s control room in which the spin buttons are integrated into the main panel and the pressure and depth meters are visible on the left hand side.

High value symbols include Captain Nemo, a seal and three other characters from this story; 10, J, Q, K and A represent the lower values. The ‘W’ in the bubble is wild and it will replace everything except for the Nerve Points and the squid bonus icon to create winning combinations.

20,000 Leagues Under The Sea Bonus Features

All symbols in winning combinations are removed from the reels and more will fall in from above, creating the opportunity to make more wins and continue the process; with each win the Nautilus dives a bit deeper and the lower value symbols are removed from the reels. On the next non-winning spin the Nautilus rises back to the surface and the reels return to their normal state.

These two bonuses can occur on any spin:

Landing three, four or five of the squid bonus symbols anywhere in view will award 5, 10 or 20 free spins respectively; during this round the red and blue numbers which land on reel five will remove or add spins when they land – the number will be between one and five.

For every five wins during the spins the Nautilus will dive and increase the win multiplier by 1x up to a maximum of 5x; reaching that maximum (20,000 leagues) will start the Giants Squid Battle in which up to three tentacles will emerge and turn up to four reels completely wild.

20,000 League Under The Sea is an enjoyable and fitting tribute to the legendary Jules Verne and his ground-breaking novel; there are bonus features aplenty here and big wins are possible in every part of this slot, even the base game. Highly recommended!