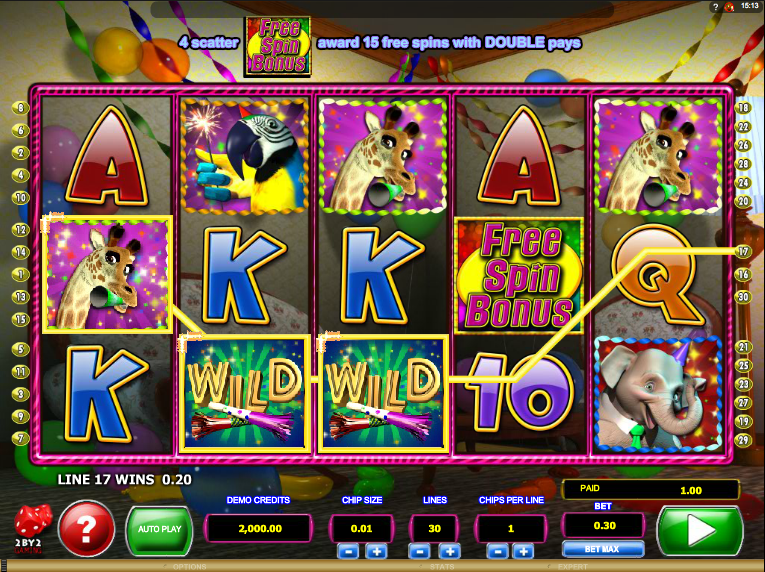 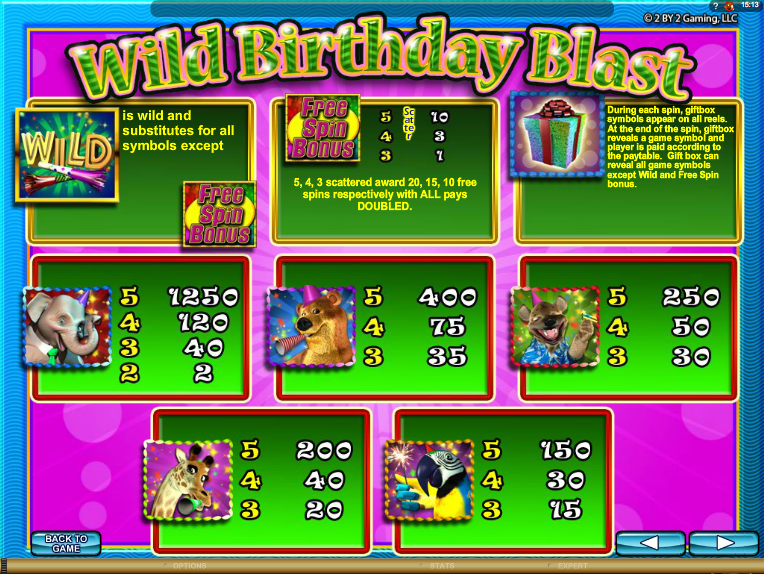 A significant birthday is always cause for celebration and this new online slot from 2by2 Gaming takes this anniversary and invites a range of exotic animals to the party. It’s called Wild Birthday Blast and it’s designed in the same idiosyncratic way as other games from this company such as Cosmic Invaders and Jumpin’ Rabbit.

Wild Birthday Blast features five reels, thirty paylines and it’s all set in a very ordinary looking room but one decorated with balloons and streamers. This is where the animals are partying and the invitees include a toucan, a giraffe, two sorts of bears and an elephant. The standard 10, J, Q, K and A make up the lower values.

Special symbols include a wild labelled ‘Wild’ and a scatter symbol labelled ‘Free Spin Bonus’ which largely explains what it does. There’s also a gift box symbol which does s useful thing which we shall explain below.

The gift box symbol can appear stacked on all the reels and one or more will land on those reels on most spins. When the dust has settled, all gift boxes in view will turn into the same symbol and if you’re lucky will match up with existing symbols to create some winning combos.

There’s no prizes for guessing that the Free Spin Bonus scatter symbols will reward you with spins if you can land three or more anywhere on the reels. You will receive the following:

That’s all good but the even better news is that all wins landed during this feature will be doubled. You can also re-trigger the spins by landing more scatters.

This can be randomly awarded after any base game spin and you will be whisked to a screen displaying twenty doors. All you have to do is pick a door to reveal a party guest and a prize. Some doors have more than one guest and will be worth more money.

2by2 slots tend to be a little basic when it comes to graphics but they manage to be quite addictive nonetheless. The background music gets annoying quite quickly but there are lots of bonus features to keep players amused.