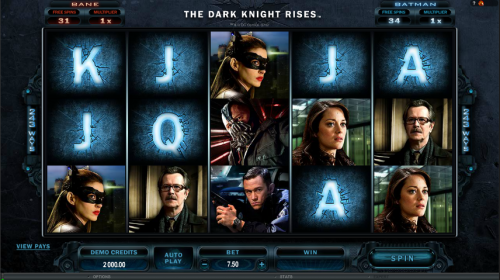 Microgaming have released the long-awaited Batman slot titled The Dark Knight Rises; we’ve been waiting to give it a try for some time and we’ve given it a thorough road test which you can read for yourself by checking out the full review here.

The short story is that it’s a great game and appears to be a real step forward in quality and features for Microgaming; The Dark Knight Rises is of course not a Marvel slot, Batman is a DC Comics creation and consequently does not include any progressive jackpot.  That’s no problem of course but it’s useful information if you’re expecting huge jackpots.

It’s certainly a feature rich game and part of the appeal of this slot is the animated scenes featuring characters from the 2012 Warner Bros film.  Batman and Bane occasionally fight their way across the screen with each hit awarding you free spins and multipliers which are displayed above the reels.  When you trigger the free spins round you’ll get that number.

The second feature is an occasional random shake of the screen which rearranges the symbols into the best possible combination.

To add to these features, The Dark Knight Rises is a dark and atmospheric game and one in which you can immerse yourself.  It looks set to become one of the most popular slots of 2013 so check it out.

You can play this game at various online casinos and it’s available at three of our recommended websites; it’s featured at Jackpot City Casino as one of the homes of Microgaming slots but it’s also found a home at Harry Casino and Casino Euro.

All these casinos offer generous bonuses for new and existing players so if you haven’t already signed up then now’s the time to take advantage of some of that free cash and play The Dark Knight Rises.