The science behind slot machines is arguably fascinating, especially if you are a dyed-in-the-wool slots aficionado.  When you press the button on a Australian pokie or UK fruit machine, pull the lever on a one-armed bandit or click the screen to spin the reels online, something is happening in the background and it’s that mysterious something that we’re going to explain in this article. We’ll being with offline slots and move on later in the piece to discuss online slots. 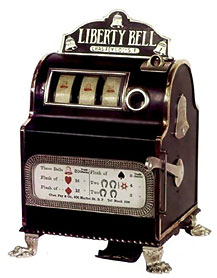 In the early days of slot machines the mechanisms behind the spinning reels were entirely mechanical; you pulled the lever, the reels spun and stopped and any winnings were paid out.

The basic mechanisms tended to vary from one manufacturer to another but the following  explanation gives a good ides of how a typical slot machine operated.

The reels were set on a notched central barrel (axle) and underneath this was another smaller barrel on which is seated the kicker (three of which cold push against the reel’s notches).  Stoppers on the smaller barrel lock into the notches when necessary.

The handle one pulls to start the process is connected to the mechanism and when it’s pulled the stoppers are released and the kicker hits the reels, spinning them.  A gear mechanism gradually slows the reels down until, one at a time, the stoppers hit the reels and produce a result.

The notches on the reels would be different depths, depending on the value of the symbol.  So a high value notch would be deeper than a low value one.  Therefore the combination of the different positions of the stopper would open the coin holder a specific amount, rewarding the player with the proper number of coins.

By the 1960s, advances in electronics began to make it possible to control the reels with electric motors.  Instead of a purely mechanical operation, pulling the lever will set off a process which sees electric pulses set the reels in motion.

So on to online slot machines then and of course the games we like to play are now entirely designed with computer software.  An explanation of programming techniques is probably unnecessary here but it will suffice to say that, like electronic slots, online slots use Random Number Generators and have closely controlled payouts.  This means the Theoretical Return to the Player can be advertised on each game.

Where electronic and mechanical slots can be churned out by the manufacturer and physically delivered to casinos and other venues, online slots are created and then licensed to online casinos which want to feature them.