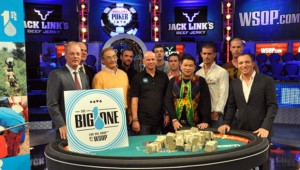 The World Series of Poker is currently enjoying it’s traditional break between the bulk of the competition which ended in July and the final stage in November when the nine qualifiers return to fight it out for the title and the gold bracelet.

In the background though there’s been some serious charity work going on by the One Drop Foundation; this charity was set up by Cirque du Soleil founder Guy Laliberté with the intention of providing clean drinking water to parts of the world unable to access this fundamental resource.

One Drop first linked up with the poker scene in 2012 when 48 of the world’s best players paid a $1m buy-in to take part in a tournament with a first prize of $18.3m.  Antonio Esfandiari eventually won that tournament but the charity benefited to the tune of $5.44m.

One Drop is now an official charity of the WSOP and in 2013 was more tightly integrated into the structure of the tournament; two of the events (High Rollers tournament and the Little One for One Drop tournament) were allocated as charity events meaning that a proportion of the buy-ins went to the charity.  The Rio All-Suite Hotel and Casino, the hosting venue, also donated their 3% house fees for these events.

As well as these two dedicated events a number of players also dedicated a proportion of their winnings to charity via the All In for One Drop campaign and the 458 players who did this raised between them $246,012.  At least one generous player donated $100,000 via this method.

The original goal of the One Drop Foundation had been to raise $1,111,111 but over the course of the WSOP tournament the charity benefitted by an amazing $1,327,206.

As an officially affiliated charity, the One Drop campaign will continue in at the 2014 WSOP and that competition will also feature the return of the Big One For One Drop so those wealthy players can have another bash at the big money.

Please Tell The Guru What You Think