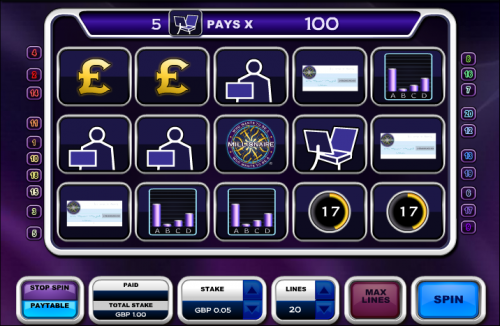 If you’ve never heard of the TV show then clearly you’ve been living in cave for a long, long time. Fronted by Chris Tarrant in the UK, Millionaire has been around since 1998 and there’s barely a country around the world which doesn’t have it’s own version.

Since that inception we’ve seen board games, console games, pub quiz machines and any number of spin-offs from the original and now we have an online slot machine based on the format.

If you’re a trivia buff and expecting questions from this game then you’ll be disappointed; what we essentially have here is a slot with the standard symbols replaced by images from the TV show.  There are five reels and twenty paylines and some nice bonus features.

The basic symbols from the lowest value upwards are a cheque, a pound sign, a timer, a question mark, the Millionaire logo, an ‘ask the audience’ chart, the contestant’s chair, the questioner and the question screen.  Special symbols are the audience ‘wild’, the jackpot ladder symbol, the lifeline symbol and the player’s choice (three green bars and an orange bar).

Land three or more of these symbols anywhere you’ll receive a sticky wild which remains for a number of spins determined by the symbols themselves.

This is a simple but seemingly quite lucrative feature which is triggered by landing three or more of these symbols in any position.  They’ll then turn into answer boxes and you get to pick one which will reveal a cash prize.

The Jackpot Ladder is the best bonus game and it’s triggered by landing three of the Jackpot Ladder symbols anywhere on the reels.  We are then whisked away to a prize ladder which it’s out task to climb.  All the player needs to do is click a randomly timed button to try and make it to the next rung (and a bigger cash prize).  You’ll get three clicks of the button to make the step up and if you make you have another three.  Dotted up the ladder are ‘free climb’ spaces which give you a lucrative leg up.  Once you fail with all three clicks, you win the prize on which you end up.

The music and the graphics all add up to an addictive slot machine which may have no questions but the chance to win money mean it’s the next best thing.  Low rollers will appreciate the £0.02 stake per payline but playing at £10.00 per payline will cost you £200 per spin with everything maxed out.