If you’re looking for a stud poker variant that is slightly different from five and seven card stud then this variant might satisfy your requirements. Six Card Stud is a version which obviously uses six cards per player from which the best five card hand according to standard poker rankings is the winner. Stud poker is a style of play in which there are no draw or community cards – the cards you are dealt are the ones you play with.

It’s played with an ante and usually a ‘bring-in’ which is a small mandatory bet laid by the player who starts the action. Two to eight players is an idea number of participants and a burn card is generally used during dealing. 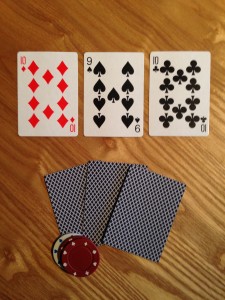 After the antes have been placed each player receives two face down cards and one face up, visible to all players. The player with the lowest face up card now lays the bring-in after which a round of betting follows in which players can:

Note that the player following the bring-in is not permitted to check. Two more face up cards are now dealt to each player, each followed by a betting round.

A final face down card is now distributed to each player followed by a final betting round and, if there are at least two players remaining in the hand, the showdown in which the strongest five card hands are compared according to standard high poker rankings.