Until the meteoric rise in popularity of Texas Hold’em, Seven Card Stud was the most popular poker variant in the United States and played in casinos and at home. Stud poker is a style of the game in which the cards you are dealt are the cards you use – there are no draw or community cards.

The aim of Seven Card Stud is to create the strongest five card hand according to standard high poker rankings. Betting is in the form of antes and a ‘bring-in’ can also be used – in this case the player who is first to play starts the betting with a small mandatory wager.

The game is played with between two and eight players. 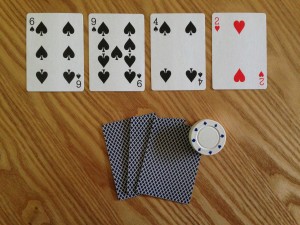 After the antes have been placed the dealer two face down hole cards to each player and one face up which can be seen by all players. Play now starts with the player holding the lowest face up card who places the bring-in. If low cards are tied then they are compared by suit. A burn card is used on the 2nd, 3rd, 4th & 5th deals.

A betting round now follows during which players may do the following although checking is not permitted immediately after the bring-in:

A second face up card is now dealt to each player follow by a second betting round. The player who bets first is the one who’s face up cards make the best poker hand (at this point a pair or a high card).

There are now two more face up cards dealt with betting rounds following each; again, the best face up hand is the one which bets first.

A final face down card is now dealt after which the showdown takes place, assuming there are at least two players remaining in the game.

Seven Card Stud is a game of regular folding so running out of cards doesn’t normally present a problem. However the discarded burn cards may be used if more cards are required.