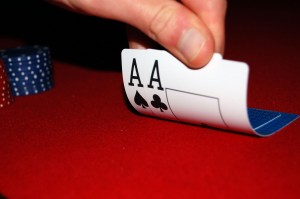 Razz is a style of stud poker which uses lowball rankings when comparing winning hands. Specifically it uses Ace-To-Five rankings which you can see by clicking the ‘Hand Rankings’ link above. Briefly, pairs are bad, straights and flushes are ignored and Aces are low, meaning the strongest hand is 5 high or 5, 4, 3, 2, A.

Stud poker is a style of play in which there are no draw or community cards; the hands you’re dealt are those you play with. Razz is usually plays with antes, a ‘bring-in’ and a maximum of eight players.

Following the placing of the antes, each player receives two hole cards from the dealer and one face up card visible to all. The player with the highest ranking visible card bets the bring-in, a small mandatory bet normally about half of the bet limit.

A round of betting now follows during which players can do the following:

Two more face up cards are now dealt to each player and another round of betting follows each deal; the player with the strongest face up begins betting in these rounds.

Two more face up cards are now dealt but the betting increments are now raised to (for example) twice the previous limit. Again the strongest face up hand starts the action.

The showdown now takes place, assuming that two or more players remain in the hand. The winning hand comprises five cards from the seven available and is ranked according to Ace-T0-Five lowball rankings.

It’s occasionally possible (but unlikely) that the dealer runs out of cards if too many players remain in the hand. In this case a single community card can be used as the seventh card dealt.