Otis Elevator is probably the most interesting name for a poker variant; the Otis Elevator Company is the world’s biggest manufacturer of lifts and escalators and the link to this game is that the community cards form an elevator mechanism on the table. This is definitely a home game and one played for entertainment as much as a profit motive.

Community card games involve the dealer placing a number of cards on the table which can be shared by all players.

Otis can be played with antes or blinds depending on your preference.

Following the initial bets the dealer distributes four face-down hole cards to each player. The dealer now places seven community cards onto the table face-down. They are placed in the shape of an ‘H’ with three cards on either side of a central card.

A betting round now takes place during which the players may do the following: 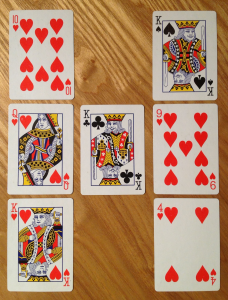 The dealer now turns over any two of the four corner cards followed by another betting round. Two more corners are turned over followed by a betting round then the two remaining side cards are revealed and more betting.

Finally the centre card is revealed and there’s one more round of betting, assuming at least two players remain in the game.

Using the layout on the right the three community cards could be:

The winner is the player with the strongest five card hand according to standard poker rankings.