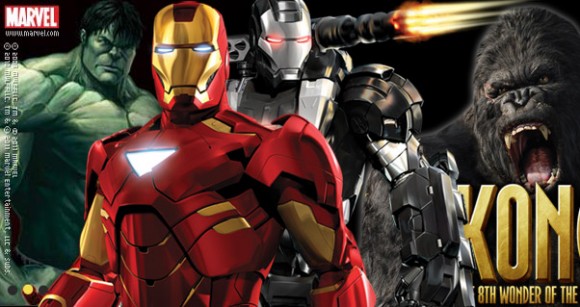 Everyone likes a huge jackpot win, a lottery win or some other game of chance that can reward you with a life-changing amount of money; that’s why online slots fans like to play progressive slots.  These networks of connected games skim a small percentage of the stake from every spin and pay it back to a small number of lucky winners.

Probably the most well-known progressive slots are Marvel slots, they are of course based on the many Marvel comic characters such as Spiderman, Iron Man and the like.  Unusually Marvel slots are licensed to, and manufactured by, two companies – Playtech and Cryptologic and this has led to a situation where the same comic character is featured in separate slots from different companies.

Cryptologic was the first to produce Marvel slots back in 2005 and Playtech joined the club in 2010; what this means in practice is that Cryptologic slots are considerably older than those designed by Playtech and inevitably this means that the Playtech ones are more polished and of a higher quality.  Playtech also seem to manage to squeeze more features into their games.  Additionally Playtech are still producing Marvel slots whereas Cryptologic stopped some time ago.

It’s worth mentioning here though that Cryptologic was purchased by Amaya Gaming in 2012 and the Canada-based Amaya, as the license holder, has begun to produce it’s own range of Marvel slots.

You can still play both manufacturer’s slots at our recommended online casinos and there’s no reason not to give both a try; there’s nothing like making up your own mind as to which slots are better.

The progressive jackpots offered are pretty similar, Playtech’s are called Power, Extra Power, Super Power and Absolute Power while Cryptologic call theirs Hero, Super Hero and Marvel Hero.  Both are triggered randomly and this means that no particular reel spin is necessary although the higher your stake, the more chance you have of entering the bonus game which will win you one of the jackpots.