For the origins of stud poker, one needs look no further than Five Card Stud; it was known to have been played during the American Civil War which was fought between 1861 and 1865 and although it’s been overtaken by other poker variants over the course of time, it remains popular. Stud poker is a style of the game in which no draw or community cards are used and the cards you are are dealt are the ones which comprise your hand.

We recommend playing Five Card Stud with an ante and a ‘bring-in’ (a small mandatory bet) to stimulate the betting. Burn cards are traditionally used to avoid any skullduggery and this just means one card is discarded by the dealer before each round.

The aim is to create the strongest five card hand according to standard poker rankings. 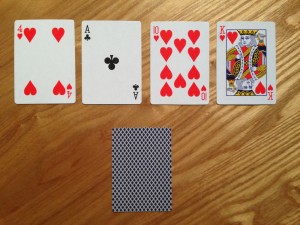 After all players have placed their antes, each is dealt one card face down and one face up, visible to all other players. If the bring-in is being used, the player with the weakest face up card will place it and the betting continues with the next player to the left. If there is no bring-in, betting begins with the player with the strongest face up card. Betting choices are as follows:

Three more face up cards are now dealt to each players, followed by three more betting rounds. Now, the player with the strongest face up hand gets to bet first.

The showdown now follows in which hands are compared according to standard high poker rankings. The showdown is not particularly common, folding happens frequently in Five Card Stud, leaving one player as the winner.