There’s very little need to provide Facebook with an introduction; we all know what it does and it’s fairly likely most of us have accounts, 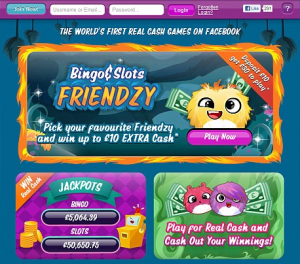 whether they’re used or not.  Depending on which statistics you read there are a lot of active users, most likely somewhere north of 500 million spread around the world.

Facebook’s issue has always been how to seriously monetise that huge user base; advertising is the main revenue generator and all users will have noticed the sponsored stories which festoon newsfeeds as well as the more traditional ads down the right hand side.  In the middle of 2012 though, Facebook finally made the obvious move to allow real money gambling apps on it’s platform.

There have long been companies offering free gaming apps on Facebook; poker in particular but also blackjack, slots and the like but gambling with real money was not an option.  Zynga, one of the biggest players, sold users extra chips if they wanted more but that was the extent of real money transactions.

The move into gambling took place in the middle of 2012 when Gamesys became the first company to take advantage of the move, adding Bingo and Slots Friendzy to the app centre.  A number of other operators have since made similar moves and British Facebook users have been the recipients of all the attention so far.  Vaguely threatening gaming laws in the US mean companies such as Zynga are trying out their products in the more mature and stable gaming market in the UK; it’s the ideal location – a well regulated market, high Facebook usage and a nation of keen gamblers makes for a perfect testing ground.

Zynga and several other companies who ran free games prior to the change have the ideal platforms to integrate real money gaming into their apps but care needs to be taken when it comes to age restrictions and user location.  Facebook will use what it calls ‘age-gating’ and ‘geo-location’ facilities to ensure the law is adhered to but whether this will placate the anti-gambling lobby is another question entirely.