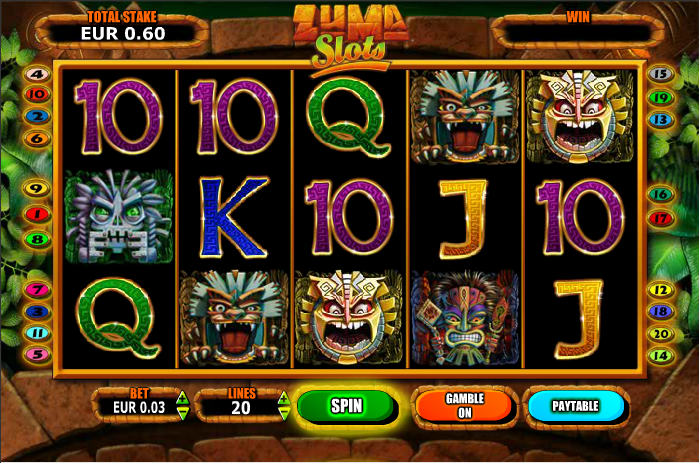 Zuma is an online slot from Blueprint Gaming and it’s a demonstration of how to convert an arcade game into a slot machine in a very competent manner. The original Zuma is one of Popcap’s classic games which sees the player work his way through various colourful levels based on Pacific Island legends and gods.

This Zuma slot removes the arcade element but it looks fantastically. crisp and graphically loyal to the original; it features five reels and twenty paylines and an interesting Gamble feature which can prove tempting.

The main symbols are an entertaining mix of Pacific Island idols, fiercely baring their teeth at all and sundry; the lower value symbols are 9, 10, J, Q and A.  The smiling green frog is the scatter symbol which activates the free spins and the Zuma logo is wild.

We’ll kick off by talking about this innovative feature and it gives you the option to gamble every win by spinning a new set of reels.

Just make sure the ‘Gamble On’ button is highlighted underneath the reels and then after every win you’ll be shown a set of four reels with a multiplier of 2x on reel one, 4x on reel two, 5x on reel three and 10x on reel four.

You get to spin a reel by pressing the Gamble button underneath it; of course the chances of a win decrease if you choose a higher multiplier.  Win and you can keep gambling, lose and the prize is gone and you’re sent back to the reels.  Note that after each win you can bank half you winnings and continue. 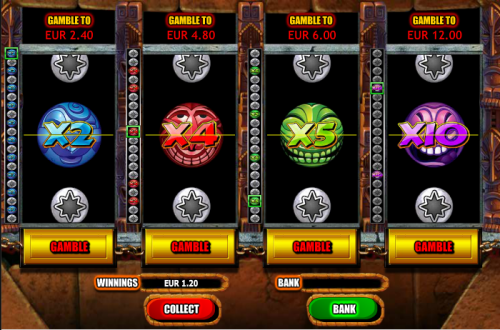 Landing three or more Zuma frogs anywhere on the reels triggers the free spins; initially you’ll be shown a selection of Tiki bosses – shoot one and he will reveal the number of free spins.

Once the spins have finished you’ll be shown another four Tiki bosses, shoot one and he’ll reveal a multiplier.

It’s possible to re-trigger more spins by landing more scatter symbols from within the feature.

While advising against gambling goes against the grain a little, we’re inclined to steer clear of the gamble feature, it seems like a speedy way to deplete your bankroll.  Hardcore gamblers can feel free to ignore us though.