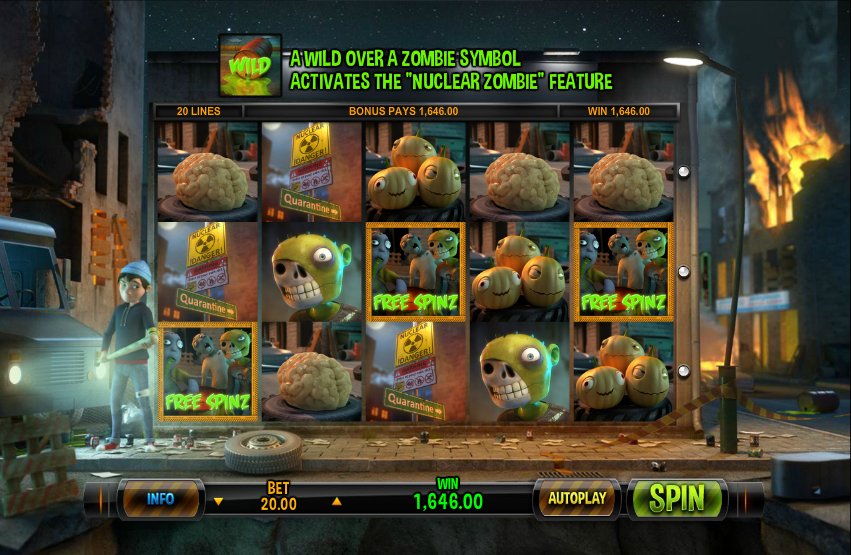 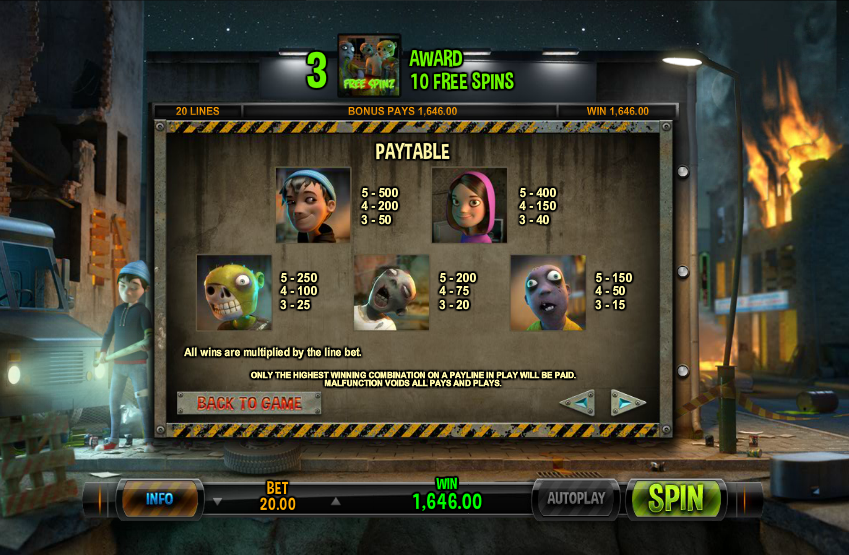 George A. Romero certainly has a lot to answer for in terms of creating and the perpetuating the zombie genre and it seems there’s no end in sight for the television shows, the computer games and of course the online slots. This one’s called Zombie Rush, it’s developed by Leander Games and it includes a number of bonus features.

Zombie Rush is a five reel slot with three rows and twenty fixed paylines; the post-apocalyptic scene is nicely rendered in three dimensions – buildings burn in the background and one of our zombie hunters stands by the reels, wielding a baseball bat.

All the symbols are related to the theme and include our male and female leads, three assorted zombies, a pile of pumpkins, a tasty brain, some weapons and some warning signs.

The wild is represented by a leaking toxic substance and it substitutes for all others except the bonus symbols – a ‘free spins’ icon and a quarantined door.

This little extra is triggered when a wild symbol lands directly above a zombie symbol; each matching zombie symbol will then become wild and reels reevaluated.

This is triggered by landing three of the ‘free spins’ symbols anywhere on reels one, three and five; while the ten spins are underway all the zombie symbols will be stacked so if you can trigger the Nuclear Zombie it should be worth a considerable payout.

Each time you land a combo containing two to four matching symbols there’s a chance that you will be awarded a free respin of the reels not featuring those symbols in the hope of landing more icons and winning a bigger prize.

Trigger this picking game by landing three of the quarantined door symbols anywhere on reels two, three and four; you will be faced with several doors so pick one which will award either a prize, a key to the next zone, Claire (a big prize) or a zombie which ends the round.

Zombie Rush is a really high quality game from Leander which is darkly atmospheric and good fun at the same time; there are loads of bonus features to enjoy and an RTP of 94.89%.