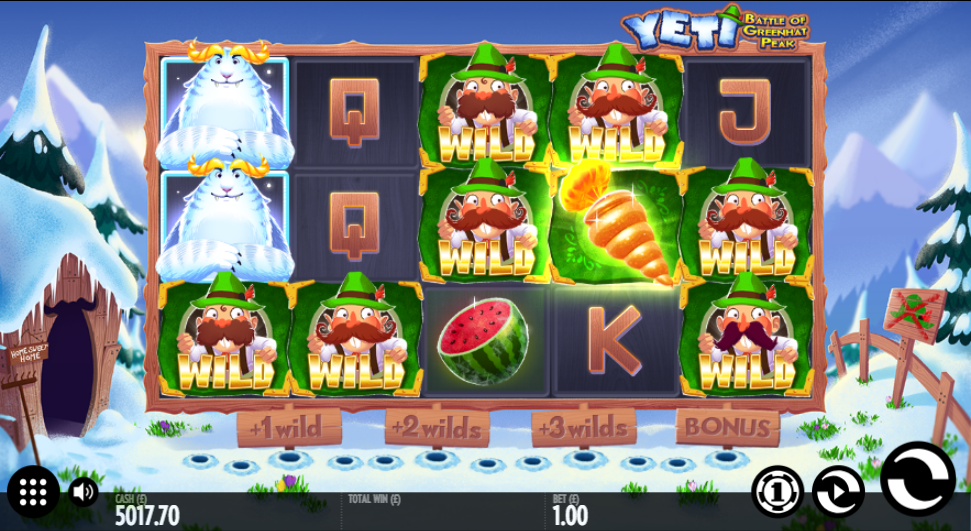 We don’t exactly know where Greenhat Peak is but apparently there’s some sort of conflict going on there and the yeti is involved – that’s the premise behind Yeti – Battle of Greenhat Peak, an online slot from Thunderkick with wild features and free spins.

Yeti – Battle of Greenhat Peak is a five reel slot with three rows and eleven fixed paylines; there’s a chilly backdrop to the wooden structure which holds the reels with lofty, snow-capped mountain peaks and a clear blue sky.

The higher value symbols include the Yeti, half a watermelon, a lemon and some cherries; J, Q, K and A represent the lower values.

The chap with the green hat is wild and he’ll substitute for all others to help form winning combos except for the carrot bonus symbol.

This is triggered by landing two of the bonus carrots anywhere in view and you’ll get one free respin with up to three extra wilds added to the reels; any wilds already there and not part of a win will also freeze in place for the respin. It’s also possible to trigger ten free spins via the Wild Attack.

Trigger this by landing at least three of the bonus carrots anywhere in view and you’ll receive:

Yeti – Battle of Greenhat Peak is a lot of fun to play and it comes with some entertaining and cartoonish graphics to enjoy; the features seem to hit regularly and the glowing, rotating carrot is one of our all-time favourite bonus symbols. This slot comes with an RTP of 96.10%.