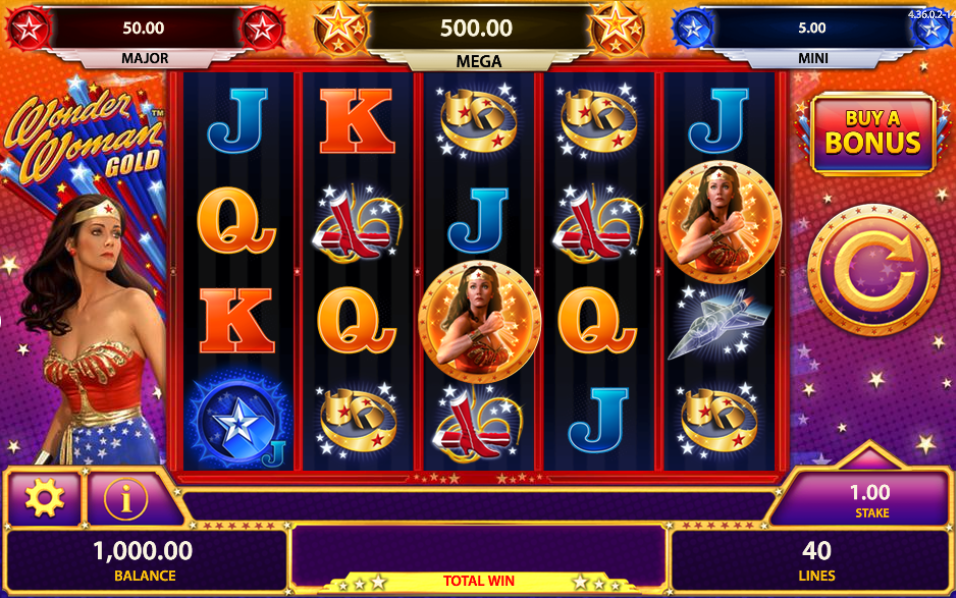 Wonder Woman is one of DC Comics oldest characters and she dates all the way back to 1942; this online slot from Bally Technologies is based around the 1970s television show starring Lynda Carter as the super-heroine. Wonder Woman Gold comes with several bonus features and offers players the opportunity to buy their straight into the free spins feature.

Wonder Woman Gold is a five reel slot with four rows and forty fixed paylines; there’s a 1970s vive to the design with plenty of bright colours and stars and Wonder Woman watching over the reels from the left hand side.

The high value symbols are Diana Prince (Wonder Woman’s alter ego), the character Steve Trevor, her spaceship and her indestructible bracelets; J, Q, K and A are the lower values.

The wild symbol is the WW logo, it appears only on reels two, three and four and it will expand to fill all positions on the reels if a win is possible; it won’t substitute for the Wonder Woman bonus icon or the Mini, Major and Mega jackpot symbols.

Before each base game spin one of the high value symbols will be chosen to appear as stacked.

This is triggered by landing three of the Wonder Woman bonus icons anywhere on reels one, three and five; you can now choose one of the following options:

It’s not possible to retrigger the spins in this round and the Mystery Stacked Reels are not active either.

Win yourself one of the big prizes by landing the Mini, Major or Mega jackpot symbols on reels one and five in the same spin.

This is an optional feature which allows players to pay extra to gain instant access into the free spins round.

Wonder Woman Gold sticks nicely to the atmosphere and design of the television show which means it can get away with some slightly basic graphics and animations; it’s definitely good fun though and worth a pop, especially as you can just play constant free spins rounds if you want. It comes with an RTP of 96.92%. For more super hero action try Cryptologic’s Wonder Woman also.