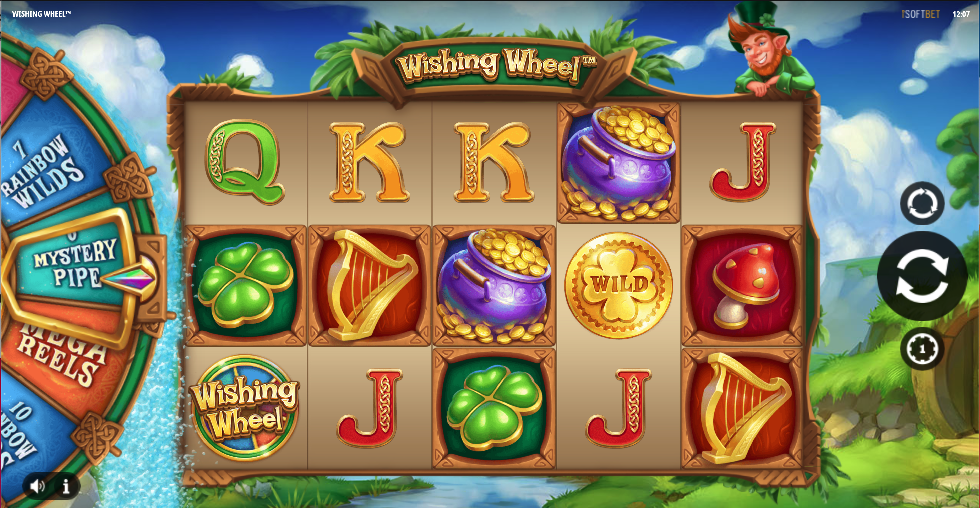 If St. Patrick’s Day is approaching, or even if it’s not, why not join us as we head to the Emerald Isle in the company of iSoftBet to check out this Irish-themed online slot machine; it’s called Wishing Wheel and, from £0.20 per spin, it tempts players with the aforementioned wheel and its many bonuses.

Wishing Wheel is a five reel slot with three rows and twenty fixed paylines; as usual it’s sunny in this fantasy Ireland where leprechauns watch over the reels and a waterfall powers the bonus wheel on the left hand side.

The theme-related symbols include the pot of gold, the harp, the four leaf clover and the toadstool; J, Q, K and A make up the lower values. The golden coin is wild and the Wishing Wheel disc is the bonus symbol.

Landing three Wishing Wheel bonus symbols anywhere on reels one, three and five will activate this feature and awards a spin of the wheel which will reveal up to fifteen free spins plus one of the following features:

Additionally in regular gameplay the following mini-features can trigger:

It’s the Wishing Wheel feature which provides the entertainment in this colourful slot, lurking there on the left hand side and gently spinning away; even if you can’t trigger the main feature there’s a decent chance of grabbing one of the base game bonuses.

Yes! The Wishing Wheel which awards free spins and one of six feature enhancements.

The Return To Player percentage for Wishing Wheel is 96.00%.

How To Win On Wishing Wheel?

Land at least three matching symbols or wilds starting from the left hand side; trigger the main feature.

Where can I play Wishing Wheel then?