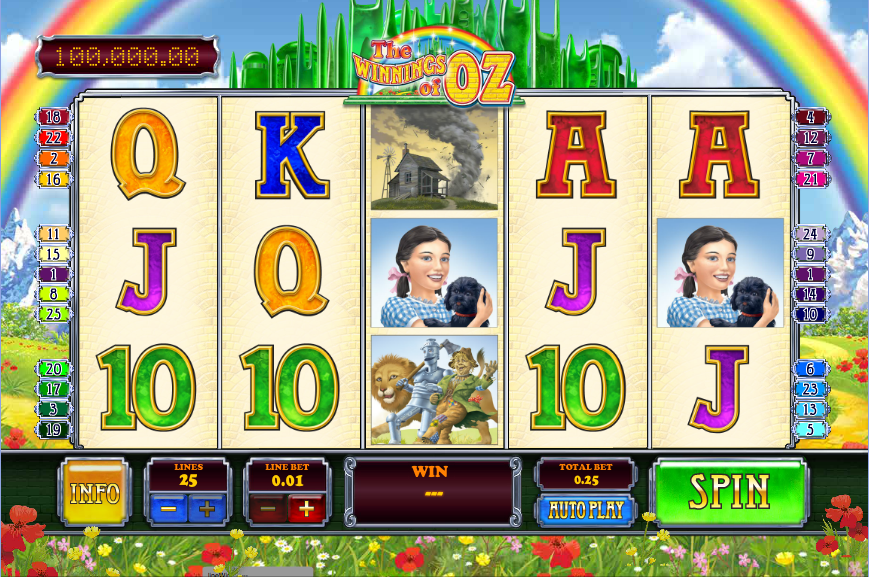 The Winnings of Oz isn’t the first Oz-themed game we’ve played and it probably won’t be the last but we don’t care as long as they’re all of a high quality. L. Frank Baum’s novel is full of the type of light and colour which makes an ideal basis for an online slot machine so read on to find out more.

The Winnings Of Oz is a five reel and twenty five payline slot with a an always-welcome progressive jackpot. The backdrop to the game is the Emerald City underneath a brightly-coloured rainbow. Aside from the usual paying card icons the symbols are familiar – the tornado, Dorothy’s slippers, the Tin Man, Scarecrow and Lion and then Dorothy herself.

There are several bonus features requiring the following symbols – the yellow brick road, the Emerald City and the good and bad witches. The Winnings of Oz logo is wild and will double your winnings when contributing to a winning combo. There’s also a Wizard Bonus symbol on reel five.

Three of the yellow brick road symbols on reels one, three and five will trigger this feature. It’s a well thought out board game in which you spin the wheel to advance along the path, collecting increasing multipliers as you go. If you can collect your companions along the way they will add to the prize total. Spinning ‘Collect’ on the wheel will end the game but if you can make it to the Emerald City you will get to play the Wizard Bonus as described below.

This is reached by either reaching the end of the path in the Yellow Brick Road bonus or landing the yellow brick road symbols on reels one and three and the Wizard Bonus on reel five.

You will be shown a number of coins and all you have to do is pick up to four for cash prizes. Finding a character will award an extra bonus at the end of the feature.

Landing there of the witch symbols on reels two, four and five kick off this feature and you being with an unlimited number of free spins.

When you have collected 5 Wicked Witch symbols the basic spins are over and it’s time for the Super Spin. Any Good Witches collected during the initial spins will be placed on the reels for the Super Spin up to a maximum of ten (and never less than two).

There are three ways to win the progressive jackpot and you can see the current total above the reels:

As mentioned just above, if you want to increase your chances of winning the progressive jackpot, play with high stakes to get that square to appear in the Yellow Brick Road bonus.

This is a top class game with lots of bonus features and some high quality graphics and sound effects. The progressive jackpot is the icing on the cake.