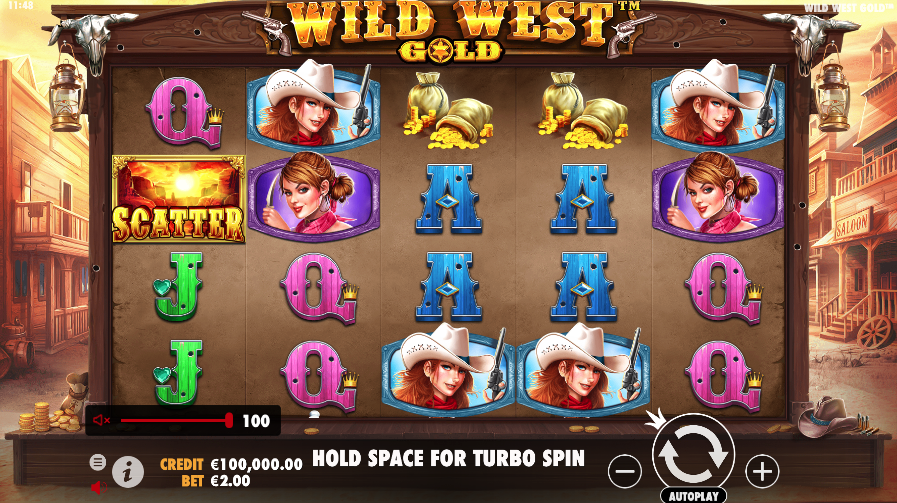 A virtual trip to the Old West is never complete without a chance to spin the reels and strike it lucky so we’re pleased to bring news of Wild West Gold, this online slot from Pragmatic Play which offers players wild multipliers and a free spins bonus feature.

Wild West Gold is a five reel slot with four rows and forty fixed paylines; unlit oil lamps swing from bleached skulls on either side of those reels while in the background there’s a dusty street bordered by wooden buildings.

The four characters from this story are some of the higher value symbols along with bags of money and a revolver; 10, J, Q, K and A represent the lower values. The sheriff’s star is wild, it appears on reels two, three and four and it will replace all standard symbols to help form winning combinations – it will also apply a multiplier of 2x, 3x or 5x to any win it helps with. The setting sun is the scatter symbol.

Landing three of the setting sun scatter symbols anywhere on reels one, three and five trigger this feature and award eight free spins initially; any wild symbols which land on reels two, three and four will lock in place with their respective multiplier until the round ends.

Wild West Gold is a cheerful trip back to an exciting and dangerous period of American history and it tempts us with an enhanced free spins round with some potentially big wins; chuck in some wild multipliers in the base game and you’ve got a winner!