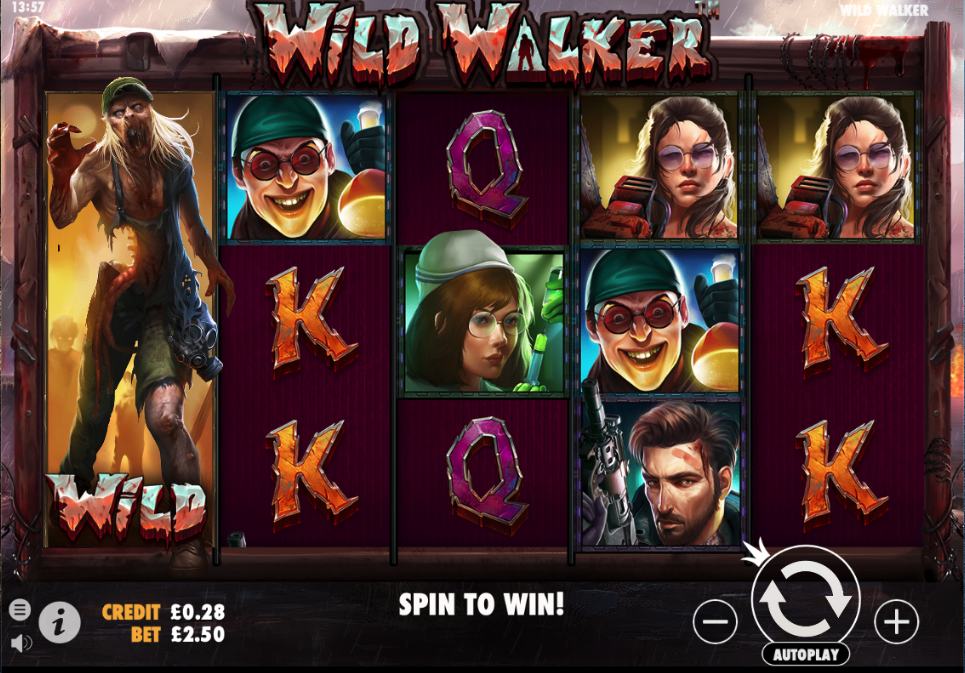 Zombie apocalypses come around quite often these days and that’s Ok if the result is an online slot machine like Wild Walker – this game is developed by Pragmatic Play and along with some undead action it offers players a free spins round with up to eight reels in play.

Wild Walker is a five reel slot with three rows and twenty five fixed paylines; the scene behind those reels is one of fire, rain and widespread destruction as the zombies run amok.

High value symbols include the four characters from this story along with the green gun and the vials of red and yellow liquid; J, Q, K and A represent the lower values. The zombie girl is wild, she’s stacked three positions high and she will always occupy one complete reel on any spin. The golden gas mask is the bonus symbol.

Landing at least three of the gas mask bonus symbols anywhere in view will trigger this feature – three masks will start you at level one and four or more will start at level two.

You’ll receive eight free spins to begin with but collecting three masks will gradually unlock the further levels which work like this:

If you make it this far then any time three more bonus symbols are collected then two more spins are awarded.

Wild Walker is an entertaining addition to the pretty high quality list of zombie-themed slots already out there and it gives us something a little extra in the bonus feature with those extra reels and extra spins. Definitely worth a look!