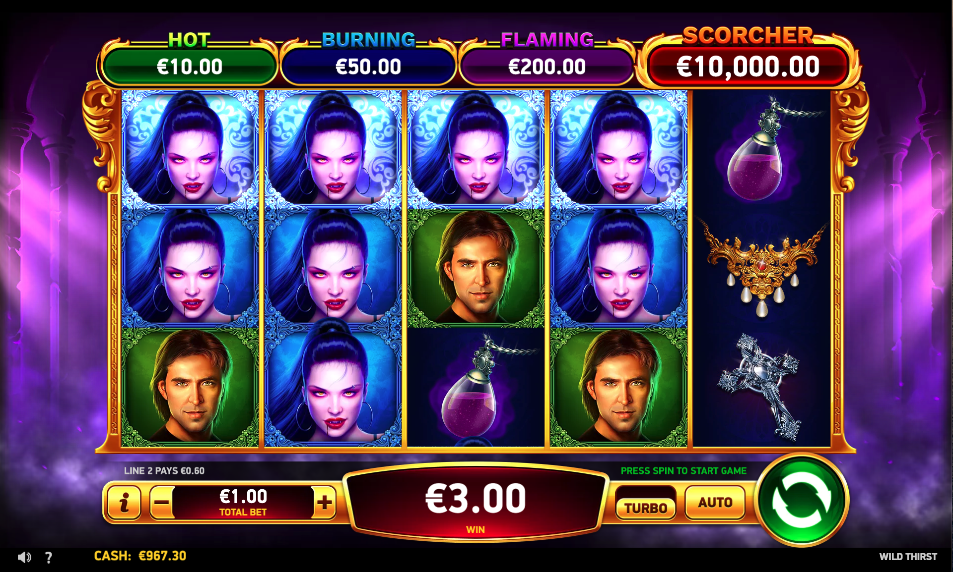 Vampires always make a great theme to an online slot machine and according to Ruby Play, the developers behind this online slot, Wild Thirst tells the tale of “an abandoned castle, hidden treasure and a haunting beauty“. It also offers players multiplying wild symbols, free spins and the potentially lucrative Firecatcher feature.

Wild Thirst is a five reel slot with three rows and thirty fixed paylines; those gold-rimmed reels float in front of the castle interior, dimly lit by purple light drifting in through the large windows on either side. The jackpot values are shown above the reels.

The high value symbols include the two main characters from this horror story, a vial of purple liquid, a gold necklace and a silver cross; Q, K and A make up the lower values.

The vampire lips are the wild and they will replace all standard symbols to help create winning matches – the wild on reel four comes with a 2x win multiplier; the rose and the Firecatcher flames are the special symbols.

Landing three, four or five of the rose scatter symbols anywhere in view will trigger this feature and award eight free spins initially but more spins can be won in the same way. Wild symbols on reels two and four can come with multiplier values up to 5x which are multiplied together for wins of up to 25x.

This is triggered by landing at least six of the flaming Firecatcher symbols anywhere in view and they will now be frozen in place for three respins; any further Firecatchers landing will also freeze in place and reset the number of spins to three again.

When there are no spins left the values on all the Firecatcher symbols (which correspond to the Hot, Burning and Flaming values displayed above the reels) are awarded to the player. Filling all positions will award the Scorcher jackpot of 10,000x the stake.

Wild Thirst is our first slot from Ruby Play and very enjoyable it is too – the graphics are high quality and menacing at the same time and the two bonus features promise big rewards for the luckier players.