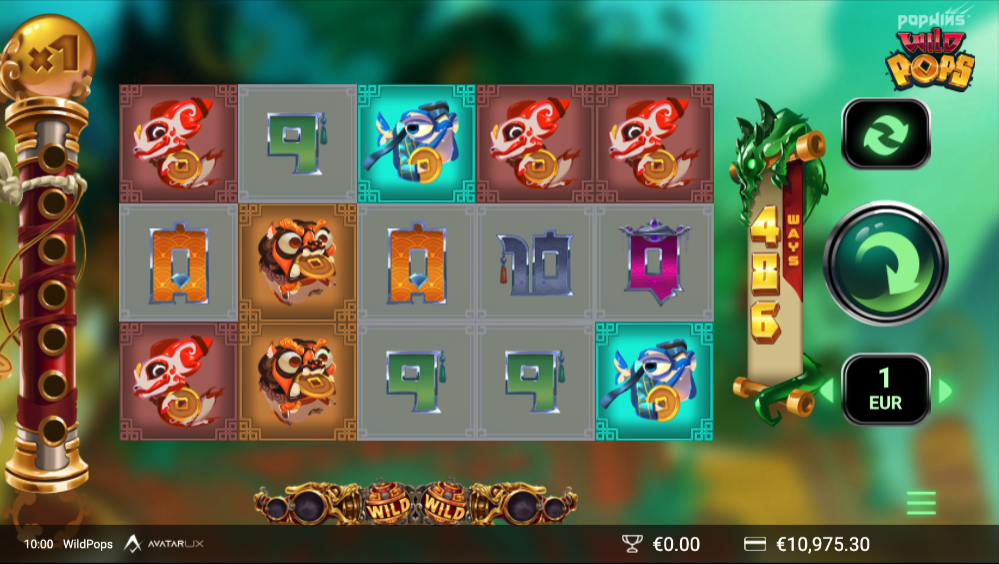 PopWins is the clever gameplay mechanic designed by Yggdrasil Gaming/AvatarUX which increases the height of the reels with each successive win and it makes another appearance in Wild Pops, this fantasy-themed online slot which also offers players random wild symbols and multiplier wins.

Wild Pops is a five reel slot with three rows and 486 ways to win initially although this can increase to a maximum of 33,614 when the main feature starts kicking in. The multiplier meter is shown on the left hand side and wins can be formed from right to left as well as from left to right.

Eight little creatures in various bright colours represent the high value symbols while 9, 10, J, Q, K and A make up the lower values. A golden bomb is the wild and it will substitute for all other symbols to help form winning combinations.

The PopWins feature works like this – each time you land a winning combination those symbols involved will explode and become two symbol positions in a vertical direction, increasing the height of that particular reel to a maximum of seven positions. Random symbols will fill the empty spaces and more combos are now possible, continuing the process. When there are no more wins the reel set reduces back down to its original size but if all reels are maxed out there are 33,164 paylines available.

On every third win two wild symbols will be added to the reels and for every seventh ‘pop’ the multiplier reel on the left will fill up and increase the in multiplier by 1x.

If you manage to increase all reels to seven symbols high you’ll enter Bonus Mode and receive three lives so if you fail to land a win on the next spin you’ll lose a life and retain those high reels rather than resetting back down to the starting position.

Inventive payline structures are all the rage these days and PopWins joins Megaways and Megaclusters in offering players something a little different. It works very well here in Wild Pops and it keeps the action bouncing along and the entertainment value high.