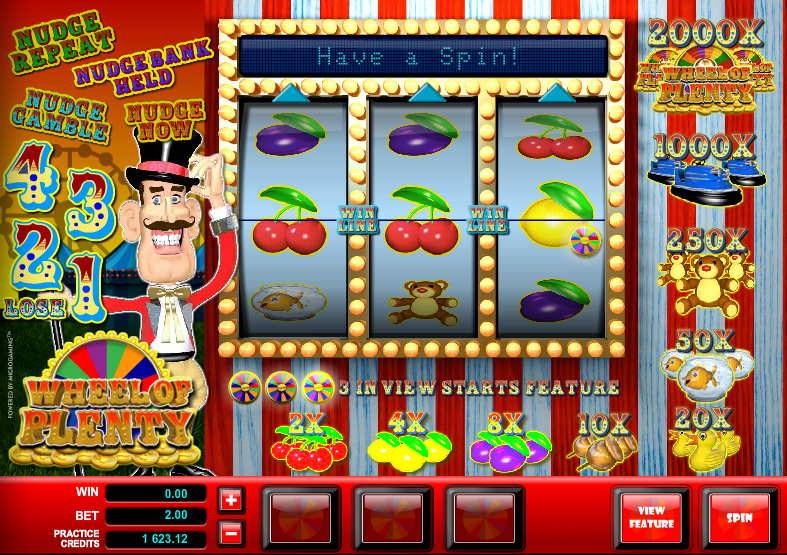 If you’re in the mood to play a classic, Las Vegas-style slot then Wheel Of Plenty mights just be up your street; it’s based on a trip to the fairground and your host for the day is the circus ringmaster, a chap with a top hat and bright white teeth. This is more than just a three reel slot though; it features nudges, holds and a groovy bonus feature.

Wheel Of Plenty is a three reel slot at heart with just the one payline and we’re well aware that many slots fans still prefer these type of games. There’s a fairground style to the design of the game and the music fits in very well with the theme.

The lower value symbols are as election of the usual fruit symbols but then we have some fairground-related stuff which includes toffee apples, plastic ducks, goldfish, teddy bears, bumper cars and the Wheel of Plenty which is the jackpot symbol.

There’a also a small Wheel of Plenty icon attached to some of the symbols which activates the main feature.

Although there’s only one payline, the small Wheel of Plenty icon attached to some of the symbols is actually a scatter; land three in view on the reels and you’ll kick off the feature.

It’s a wheel of fortune-type game where you spin the wheel and win prizes; those prizes can be as simple as cash or picks from the two categories to the right of the wheel – you can see this in action in the video below. If you don’t want tyne prize offered you can continue spinning the wheel but each spin removes an option, making it more likely that you’ll hit a dark segment and be returned to the base game.

You will receive random opportunities to nudge the reels and hold symbols; you’ll also notice that the little board above the reels offers hints such as ‘Let ’em Spin’ and will trigger the Reel Spin’ bonus which guarantees you a win featuring one of the symbols in view.

Use the ‘hold’ facility wisely – rather than holding in the hope of matching symbols, look for the scatter icons which will win you the feature. You can trigger it fairly regularly in this manner.

This is a great game which should offer something to all slots fans with it’s combination of three reels and lots of bonus features. The sound might get on your nerves eventually but you can always press the mute button.