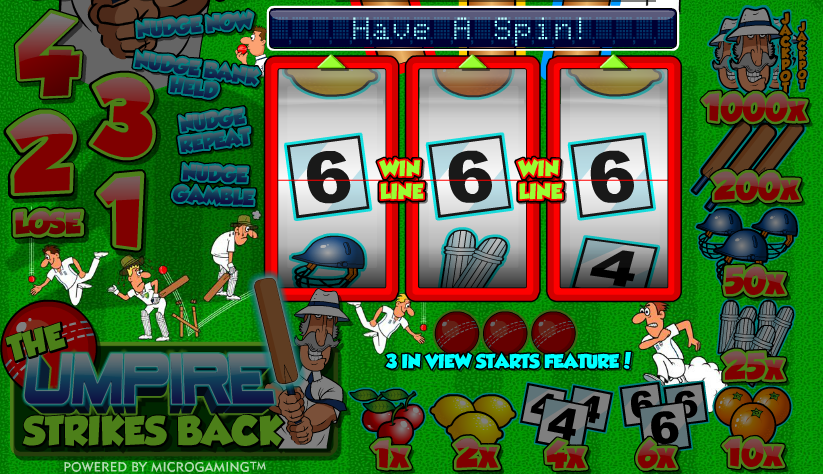 Mere days after checking out our first ever Baseball-themed online slot – Hot Shot, we now embark on another first. The Umpire Strikes Back is a peculiarly English fruit machine-style game from Microgaming all about cricket, a game of impenetrable rules and very little action which can take as long as five days to complete.

The action in The Umpire Strikes Back is a little swifter; this is a three reel and single payline slot with some base game extras and  fairly intricate but entertaining main feature. There are plenty of cricket-related symbols including signs for ‘4’ and ‘6’, pads, helmets, cricket bats and the distinguished-looking umpire.

This is what you should be aiming for and to trigger it you’ll need to land three of the cricket balls attached to the symbols anywhere in view. This kicks everything off and you’ll be taken to a screen similar to the one you can see in the video below.

You will now get to play a Hi/Lo gambling game but there are three numbers to choose from which represent extra multipliers, nudges or bonus features. If you win three times in a row you will get an extra bonus which entitles you to extras such as a guaranteed gamble win or an extra life. These are important in working your way up the columns.

When you are satisfied with your win, collect it but be sure to collect the one you want by clicking the button at the right time.

Nudges are randomly awarded and allow the player to jog down single reels to try and make winning combos or to collect cricket balls. Sometimes you may also get the opportunity to repeat, gamble or bank the nudges.

You will regularly be offered the opportunity to hold the reels and spin the remaining ones and this is important when trying to collect the balls.

If you see this message on the notice board, ignore any holds which are offered and just spin for a guaranteed win.

There’s lots of strategy involved in collecting the cricket balls so use the nudges and holds wisely to achieve this. When playing the feature use the bonus after three correct guesses to your advantage; for example if you get a guaranteed gamble win and there’s an eleven on the board, you know that the next spin will result in a twelve, meaning at least one more guaranteed win.

This is an extremely addictive slot with a superb bonus game that will keep you playing long after you should have stopped. Cricket fans will appreciate the soundtrack music when you’re playing the feature.