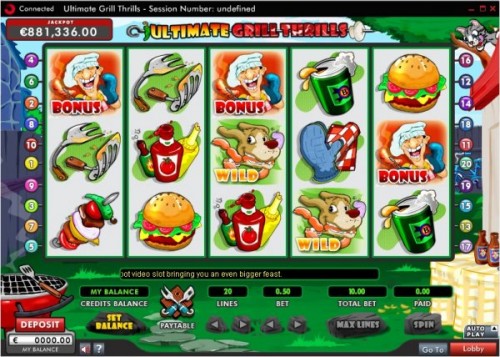 If you live somewhere that’s warm all year round then you’ll be completely familiar with the culture of the barbecue and all the accessories necessary for a successful grilling session. Those of us in cooler parts of the world may have to restrict our barbecuing activities to a few months of the year but of course that makes it more of a special occasion.  Random Logic have now taken the barbecue theme and created a first class online slot with an innovative bonus feature.

Ultimate Grill Thrills is a five reel and twenty payline slot with a cheery summer soundtrack; behind the reels is a garden scene with sausages cooking on the grill and of course some empty beer bottles scattered on the grass.

Loads of barbecue-related symbols occupy the reels so from low to high value we have cooking tools, ketchup and mustard, oven gloves, a can of beer, a flaming barbecue, a tasty kebab, some grilled fish, sweetcorn, a sausage and a fully decked-out burger.

Special symbols are a wild which is a dog fleeing the scene with a mouthful of sausages and a scatter represented by a blonde girl in a bikini drinking a cocktail.  The bonus game is activated by the cook (male of course) symbol.

The dog with the sausages in it’s mouth is not only a wild symbol, it’s also the key to the progressive jackpot.  The current jackpot is shown in the top left hand corner of the screen and it’s yours if you can land five dog symbols on an active payline.

It’s time to make a kebab and to get the chance to put together this tasty treat you’ll have to land three or more of the cook bonus symbols on an active payline.

You now get to play five rounds and in each you’ll need to pick an ingredient to reveal a cash prize.    As soon as you pick one that says ‘Game Over’ , that’s the end of the bonus round and the prizes awarded for the ingredients collected so far are totalled.

Ultimate Grill Thrills adds some extra quality to the original Grill Thrills slot and also a progressive jackpot which offers a life-changing amount of money.  The bonus round is fun and the music adds to the summery feel.