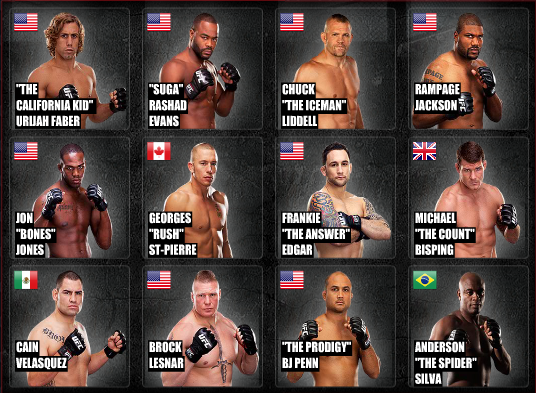 For us, mixed martial arts is the future of ring combat; it easily surpasses boxing as a test for the fighting ability of the contestants and the UFC, the biggest of the promotional companies, has come a long way since its inception back in 1993.  So it’s well beyond time that we saw an online slot based in the Octagon and this one has been developed by Endemol Games.

When you first load the game up you’ll be given the choice of selecting one of twelve UFC fighters; they’re mostly American but Brits can choose Michael Bisping and there are also options for Mexicans, Canadians and Brazilians.  This fighter will be the one featured on the reels when you start playing.

This slot features five reels and twenty paylines and it’s set in a darkened Octagon; your chosen fighter stands ready to the left of the reels.

The main symbols are a punch ball, an Octagon, the ring announcer, two sexy ring girls and the UFC logo.  Minor symbols are J, Q, K and A.

Special symbols are a wild with your chosen fighter, a championship belt bonus and a bumping fists bonus.

There is one golden wild symbol on the reels and if you can land it on the centre reel it will become an expanding wild, covering all places above and below.  In addition, four other random symbols will become wild for that spin.

Land the championship bonus belt on reels one, three and five to trigger this mini-game; you’ll be matched up against another fighter and then the bout begins.

You’ll need to spin a reel to select the moves for your fighter and the better you fare in the fight, the more money you’ll win.

All fighters need to train and this bonus game is triggered by landing three of the bumping fist symbols on reels two, three and four.  You’ll now get to choose which fighters to compete against while training.

Free spins are awarded to you for your performances in these training bouts and the spins start when the training is finished.  A slightly different set of reels is used for the free spins.

UFC fans will love this slot; it’s a high energy game which includes all the big names in the sport and it features a couple of innovative bonus games.  The ring girls are the metaphorical cherry on top.