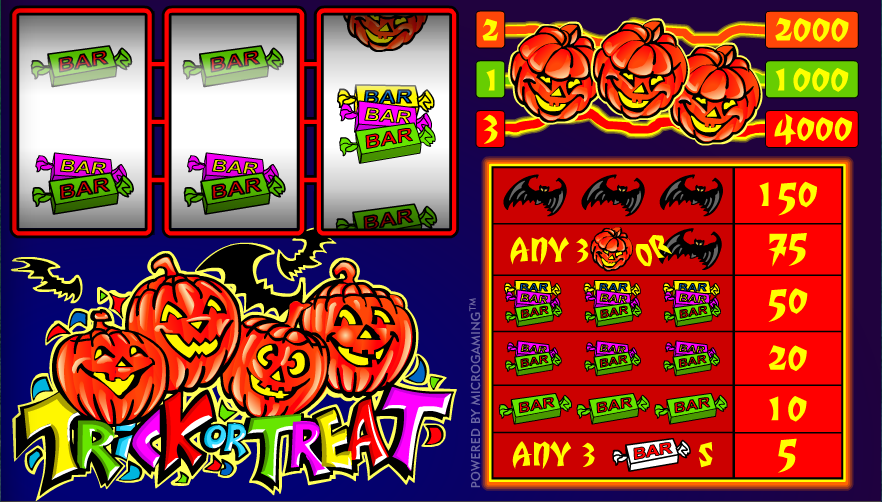 Halloween seems to be celebrated these days in a manner which it never was when those of us of a certain age were a bit younger. On one night of the year, hordes of parents escort their children around the suburbs and housing estates in the hope of finding a householder willing to hand over some sort of reward. Trick Or Treat is a Microgaming slot based on this particular event so read on to find out more.

Trick Or Treat is one of Microgaming’s older classic slots and it follows the design of a number which were released during the same period. It features three reels and three paylines and the big log below those reels is row of glowing pumpkins underneath several swooping bats.

The right hand side of the screen contains the ever useful paytable which displays all the relevant information about this game. The symbols here are theme-related and include green sweets, green/purple sweets, green/purple/yellow sweets, pumpkins and bats. The pumpkins are the most valuable and worth up to 4000x for three on a winning payline.

Aside from three matching symbols on a payline, there are various other ways to win money including:

Betting is accomplished by using the ‘+’ and ‘-‘ buttons below the reels; this gives a range of £0.25 – £5.00. Now you can select a coin level of one, two or three which will double or triple your stake proportionately.

That extra financial incentive means this slot offers something a little extra and it’s worth a go for fans of classic slots. We like the traditional sound effects.