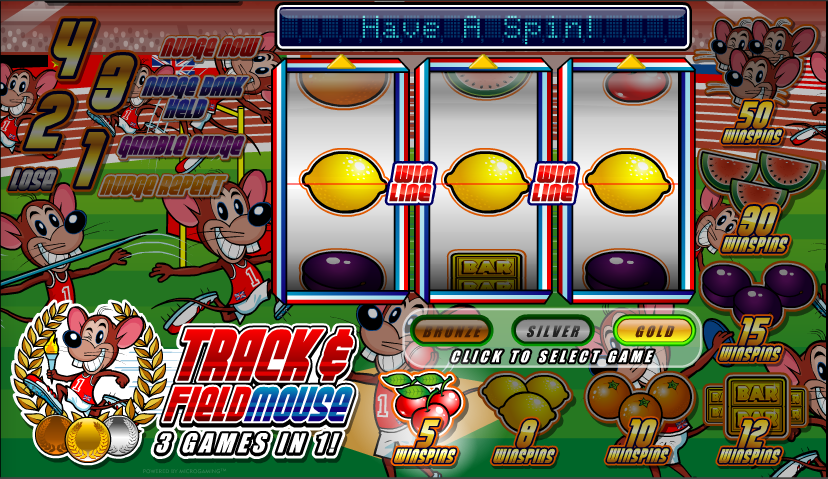 Animals and sport seem to come together with surprising regularity in the world of online slots and we have one more to shoe you here – Track & Fieldmouse is one of Microgaming’s UK-style fruit machine games and it’s theme is one of mice performing athletic events and then parading around with trophies.

Track and Fieldmouse is a basic three reel and one payline slot set within the stadium where the mice are running around, chucking javelins and the like while grinning like they’ve eaten all the cheese.

All the usual symbols are in evidence here – cherries, lemons, oranges, bars, plums and melons but the biggest base game prize is won by landing three mice on the winning payline.

You will quickly see that there are no cash prizes available in the base game; your aim is to create winning combinations which are then exchanged for ‘Winspins’. These Winspins are free spins which take place on a different reel which you can see in the video below. Every one is guaranteed a win and these are multipliers of your stake.

The symbols on this set of reels are different and include cheese, winged trainers, a stopwatch and an Olympic torch.

There are three levels at which to play this game – gold, silver and bronze – with the more valuable medals costing more to play but resulting in a greater number of Winspins.

Nudges are regularly and randomly awarded to the player and allow them to nudge single reels down in an attempt to make winning combinations. Additionally you may receive repeat nudges, options to gamble them or the chance to nam them until the next spin.

Holds are also randomly awarded and let the player freeze any or all reels in the hope of landing a winning combo on the next spin.

If you see the words ‘Shifta’ on the sign above the reels, the reels will ear range themselves into a guaranteed win.

If you these words on the sign, ignore any temptation to hold anything and just press ‘spin’ for another guaranteed win.

If you are offered the opportunity to gamble your nudges, always do it. It’s very easy to stop the flashing light at the right point and win yourself one more nudge.

Track & Fieldmouse is not quite as feature-rich as some of Microgaming’s other fruit-machine-style games but the Winspin feature is quite entertaining. The good news is that it seems to get triggered quite regularly.