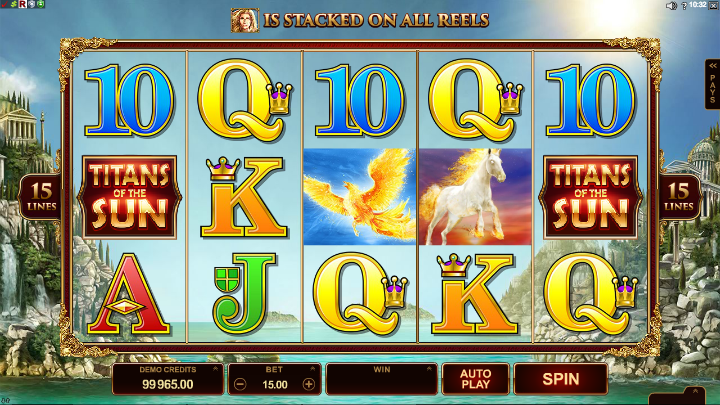 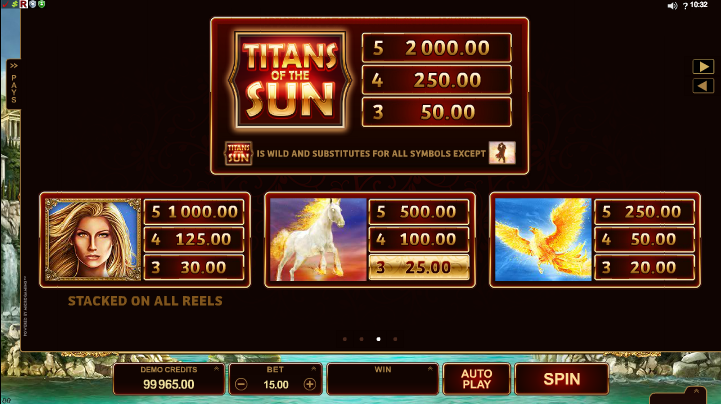 Theia and Hyperion were brother/sister in Greek mythology but still managed to be parents of Helios (the sun). Microgaming have released two online slots based on these characters – this one’s called Titans Of The Sun – Theia and there’s no prizes for guessing that the other is called Titans Of The Sun – Hyperion. If you’ve read our review of that game already then you know how it all works but if not it’s all detailed below.

Titans Of The Sun – Theia is a five reel slot with three rows and fifteen fixed paylines; the backdrop to the transparent reels is a lovely Mediterranean setting with blue seas and skies lapping at the rocky shores of islands dotted with Greek temples.

The three high value symbols are Theia, a flaming horse and a fiery bird; the lower values are the standard 10, J, Q, K and A. Theia is stacked on all reels to help out with winning opportunities.

The Titans Of The Sun symbol is wild and substitutes for all others except the scatter – that’s represented by a silhouette of Theia and Hyperion. The sun symbol is a mystery icon which we’ll describe in greater detail below.

These sun symbols are stacked on all reels and when they land they will all transform into one symbol which can result in some big wins when they match up with existing icons. In the base game they’ll transform into everything except the wild but in the free spins they can become wild also.

It does seem slightly lazy of Microgaming to release two games which are virtually identical but if this is a theme you like then why not? The Stacked Mystery Symbols are a nice touch and there are some nice animations when you land a winning combo.