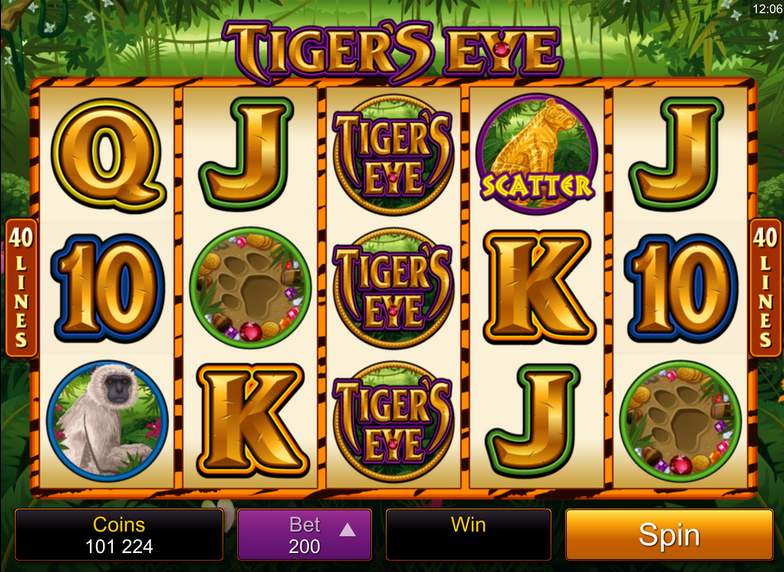 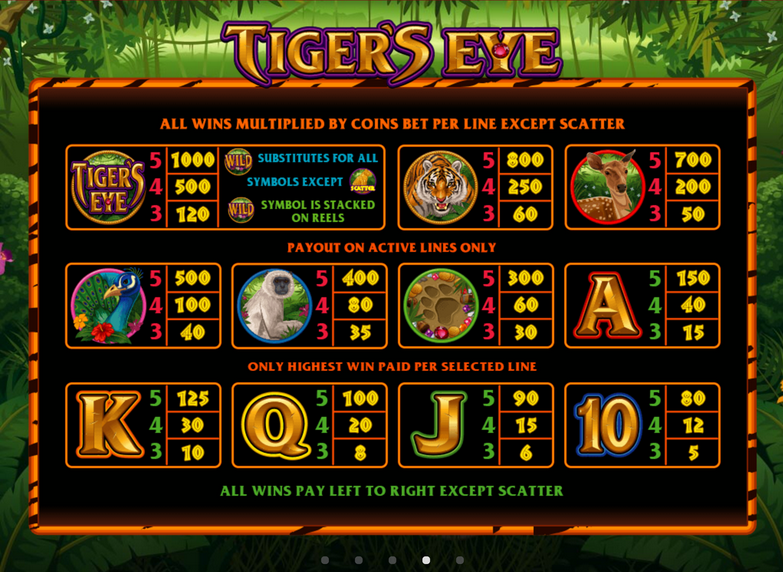 Everybody and their dog owns at least one mobile device these days and so it makes sense that an increasing number of online slots are being developed for tablets and smartphones only. Tiger’s Eye is one such game, it’s developed by Microgaming and it’s based around a jungle theme with lots of colourful wild animals. There’s also a bonus feature to add to the mobile fun.

Tiger’s Eye is a five reel slot with three rows and forty fixed paylines; the reels are decorated with tiger stripe colours behind which is a steamy tropical jungle. The sound effects aren’t particularly jungly but they provide a nice atmosphere.

There are five high value symbols and these include a tiger’s paw print, a monkey, a tropical bird, a deer and an angry-looking tiger. 10, J, Q, K and A are the lower values.

The Tiger’s Eye logo is wild and appears stacked on all reels, meaning all positions on that reel can be wild, offering the opportunity for bigger potential wins. The scatter symbol is a golden tiger statue which also activates the main feature.

There’s fairly standard free spins round available here and to trigger it you will need to land three or more of the golden tiger statue scatter symbols anywhere in view.

You will now receive ten free spins but as an added extra the multiplier for any wins will increase by 1x on each spin. So on spin one the multiplier is 1x and this builds up to an enticing 10x for the last spin.

Unfortunately it’s not possible to re-trigger more spins from within this feature.

Tiger’s Eye is a fairly run-of-the-mill mobile slot and there are certainly better options around; however it’s not a bad way to spend a few minutes and a few pounds, especially with that increasing multiplier in the bonus feature. There’s an RTP of 96.26%.