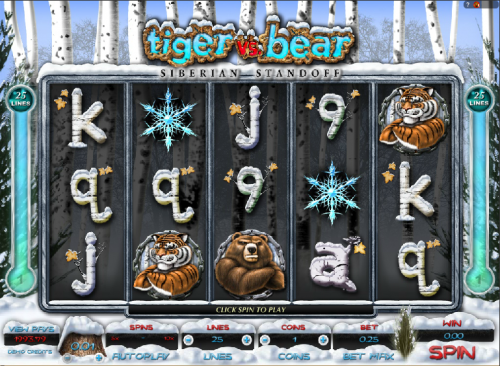 In the wilds of Siberia there’s a secret battle going on every single day; tigers and bears roam the landscape and battle each other for dominance of the freezing environment.  At least that’s the premise behind Tiger vs Bear Siberian Standoff from Microgaming, a humorous look at what is quite possibly a fight to the death in real life.

Tiger vs Bear is a really nicely designed online slot which features five reels and twenty five paylines; snow is a big part of this game and it blankets the reels and the ground below them.  In the background we can see a bleak forest scene and a chilly northern sky.

9, 10, J, Q K and A represent the snow-covered lower value symbols while the higher values are a geometrically perfect snowflake, a chilly-looking leaf, a grumpy looking bear and a formidable looking tiger.  The Tiger vs Bear logo is the scatter symbol and if you land the wild symbol you’ll see a claw ripping through the reels.

This is an excellent bonus game and it features a contest between our two protagonists; you can trigger this bonus by landing a tiger on reel one and a bear on reel five in the same spin or vice versa.

You now get to pick the beast you think will win the battle and the two wild animals will face off in an arm-wrestling contest.  There’s no flailing claws and sharp teeth here – these creatures settle the argument in a much more civilised way.

If you picked the tiger:

If you picked the bear:

Bear wins – You will get to play the Bear Claw feature with a 2x multiplier.  You’ll be taken to a screen displaying several bear claws; pick them to reveal cash prizes until you hit the ‘Stopper’ which ends the round.

Bear loses – you’ll play the same game but without the multiplier.

This is well-designed and humourous online slot which adds some fun to the long Siberian winter; the background music is dramatic and the bonus games add some real creativity to the proceedings.