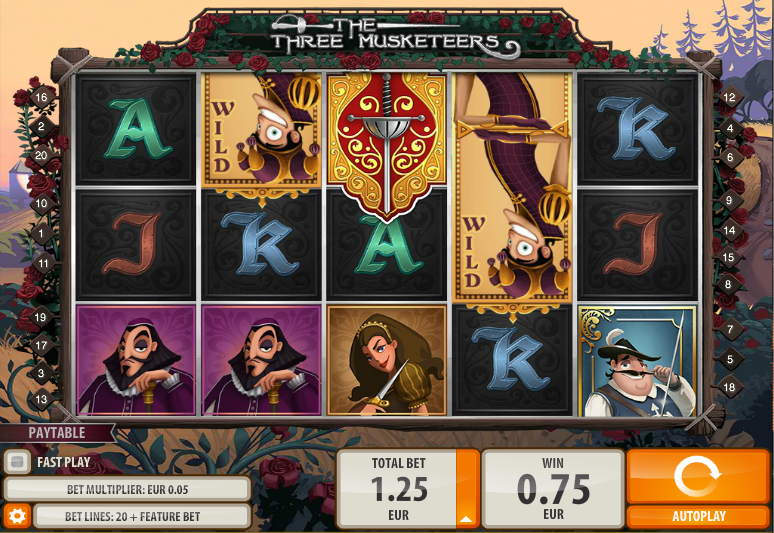 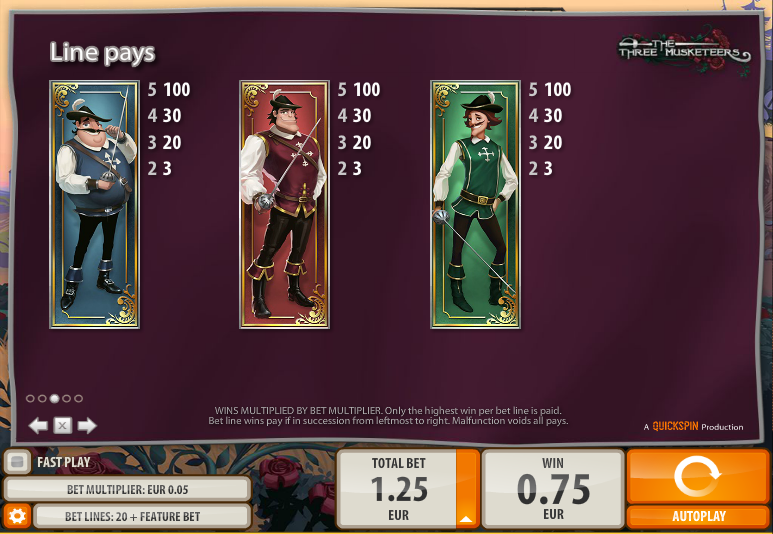 Let’s travel back in time and visit the 17th century to revel in the antics of Athos, Porthos and Aramis, the title characters of The Three Musketeers by Alexander Dumas. This online slot is not the first with this theme or name (see Playtech’s version here) but it’s by Quickspin and should offer something a little different to it’s predecessor.

The Three Musketeers is a five reel slot with three rows and twenty paylines; the design is stylised, cartoonish and romantic and beyond the rose-framed reels there’s a view of rural French countryside.

The main symbols are all characters from Dumas’ novel; aside from the three mentioned above we think the others are Milady de Winter, Cardinal Richelieu and Monsieur de Treville, but we could be wrong. J, Q, K and A make up the lower values. The Musketeers may appear stacked on the reels, filling a whole one and they will also payout for just two in a row.

The jester is wild and appears stacked on the reels; if it fills a reel and contributes to a winning combo you will receive a multiplier for that win of 1x – 4x. The gold sword symbol is the scatter which is the key to the feature.

The sword scatter symbol appears only on reels two, three and four but if you can land three anywhere in view this feature will be triggered.

You will receive ten free spins but there are some extra features to spice things up. If part of the stacked wild appears it will nudge up or down until the whole reel is wild. Any wins formed will then be subject to a multiplier of between 1x and 4x.

During the spins all three Musketeer symbols can substitute for each other, making it much easier to form wins.

We like this, the graphics are crisp and the background music seems authentically contemporary. Lots of little extras make it well worth a go and there’s a decent RTP of 96.64%.