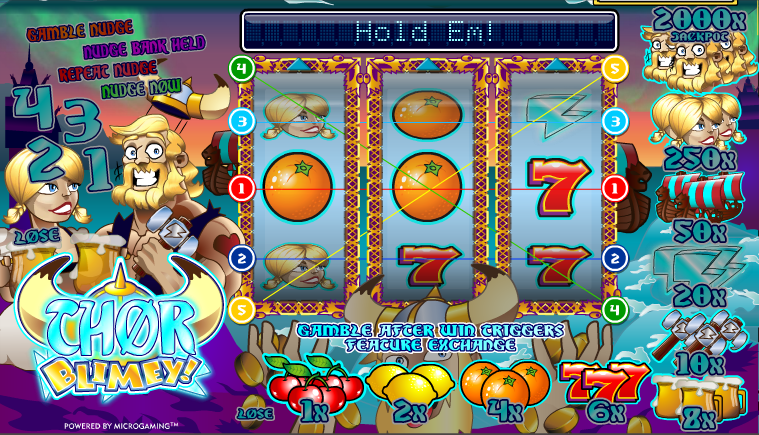 We’ve reviewed a couple of Thor-related online slots in the past but those have both been five reels versions; not only does Thor Blimey! have a quintessentially English title but it also has just three reels. It’s a Microgaming release and Jackpot City Casino describes it as a UK-style slot which is always good news for the fruit machine fans.

Thor Blimey! is much more of a comic affair than the two Marvel-themed games we mentioned earlier and takes place over three reels and five paylines; Thor and his lady friend are blonde with gleaming teeth and stand in front of Viking longships afloat in a bay.

Several varieties of fruit act as the lower value symbols but there’s also flagons of ale, Thor’s hammer, lightning strikes, longships, the girl and Thor himself. There are also nudges, holds and an extensive bonus round which we shall discuss below.

You’ll probably want to do this so click the ‘Exchange’ button to kick it all off. You will be taken to a screen with a list of features down the left hand side and nudges at the bottom.  In the centre is the board around with you move when you click the spin button.

You can keep spinning and moving around the board, collecting nudges and features until you lose it all or decide you would like to keep the money and maybe play the collected feature. Check it out in the video below.

Randomly awarded nudges will enable you to nudge the reels down in an attempt to make a winning combination.  Holds will be also be awarded fairly regularly and allow you to freeze one or more reels in the hope of spinning matching symbols.

Don’t expect to collect too much cash or too many features in the bonus round; we’ve found it pretty difficult to win anything substantial here, despite playing the feature many times. Have a couple of spins and take your winnings.

This is certainly fun to play but it does seem harder to win than similar games such as Doggy Reel Bingo or Fruit Smoothies. It should prove tempting for fruit machine fans though.