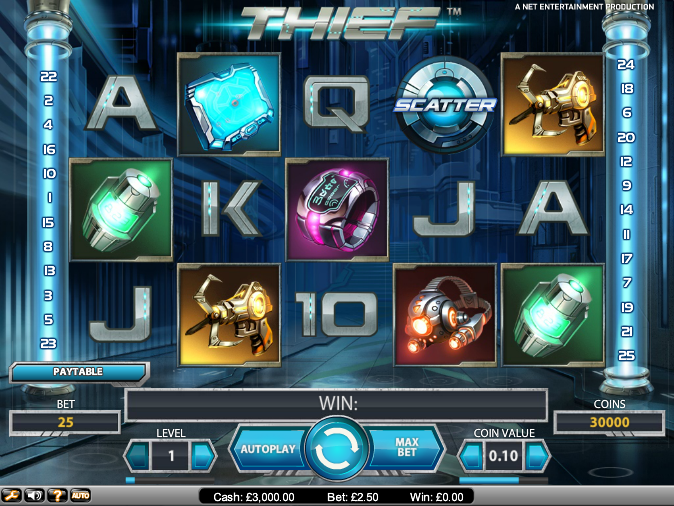 Net Entertainment seem to produce an endless conveyor belt of quality online slots and Thief is no exception; it’s a relatively new release from the designers of some of our favourite slots such as Mega Fortune and Dragon Island.

Thief tales place in some sort of future environment in which the main protagonist is a sexy cat burglar; the game looks as good as you would expect from NetEnt with a Blade Runner type environment complete with an atmospheric blue colour scheme and persistent rain.

It’s a grim world but the bright symbols contrast with the background.  As well as the usual 10, J, Q K and A we have a range of futuristic burglary tools at our disposal including a grappling gun, headgear, an explosive device and a techy looking watch which clearly does more than just tell the time.  A diamond symbol represents what our curvy heroine can win if she is successful in her mission.  Additionally there is a scatter symbol, an adrenaline scatter symbol and ‘expanding’ wilds (of which more later).

Expanding wilds are the other way to win money on Thief and will only appear on reels 2, 3 or 4.  Wild symbols feature our foxy main character and if they result in a winning combination they expand to cover all three symbols on that reel.  This means that it’s possible (but unlikely) to cover all nine symbols on the middle reels, resulting in the opportunity for huge wins.

Players can bet between €0.25 to €125 and twenty five paylines are available over five reels.  This results in a possible cash jackpot of €2,500 which is not the most we’ve come across but it’s not to be sniffed at.  Net Entertainment have come up trumps again with Thief and slots fans will appreciate this new offering.