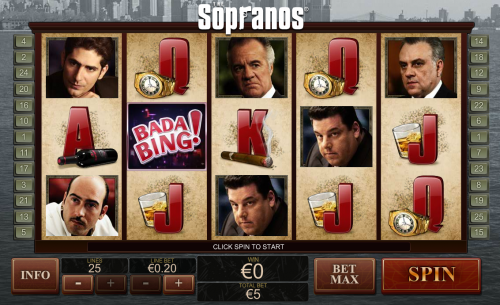 Do you appreciate crime dramas? Do you like watching shows with numerous Italian-American stereotypes?  If so you’ll probably have been a fan of HBO’s amazing show The Sopranos, the tale of a New Jersey-based crime family which spanned six seasons and is widely regarded as one of the most successful series ever produced.

Playtech have grabbed hold of this theme and  produced an online slot machine which aims to bring the excitement and atmosphere of the television series to the computer screen.  It’s an excellent effort too and what it may lack in state of the art graphics it more than makes up for in a shedload of bonus games.

It’s a five reel, twenty five payline machine and as well as the 10, J, Q, K and A symbols, we are treated to a range of characters from the show as the special symbols.  We have Tony Soprano, Silvio Dante, Paulie Gualtieri, Salvatore Bonpensiero, Chris Moltisanti, Artie Bucco and John Sacramoni.

There’s a Bada Bing symbol on the middle three reels, a wild card which is Tony Soprano, storage containers on reels one and five and a scatter symbol which is the Sopranos logo.

The Bada Bing bonus is triggered when the symbol appear on each of the middle three reels; you will then get to choose which of five characters will meet with Tony for which a prize is then awarded.  You will then either get a chance to pick another character for a meeting or the round will end.

If you land the storage containers on reels one and five a bonus game starts in which you can pick one container from ten on a map for a cash prize.  You can reject the prize and choose another one twice before the round ends.

The scatter symbols are the big feature and you have to work your way up through them as if you were being promoted through a crime family.  The levels are as follows:

Lastly there’s a Raid bonus which is randomly triggered and gives you the chance to stash four envelopes of cash (a multiplier of 2x your bet) in up to four different locations.  You can put them all in one or spread them around but only two are safe.

The Sopranos offers a multitude of bonus games and extra features and it’s definitely one of our favourites; there’s also the replay value of working your way up through the scatter bonuses.