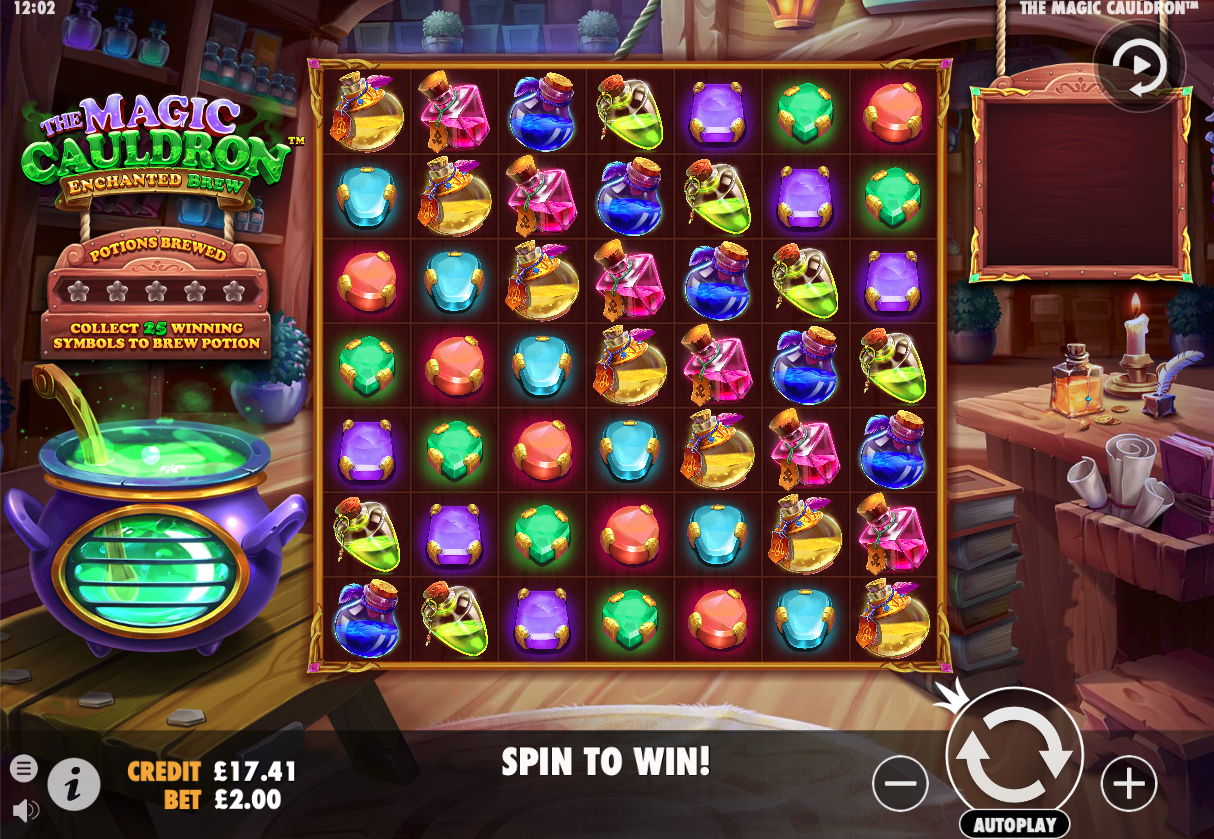 There’s magic afoot and potions to be created in this enticing online slot from Pragmatic Play – it’s called The Magic Cauldron: Enchanted Brew and this fantasy lab promises a cluster gameplay mechanic, tumbling reels and a whole host of bonus features and reel modifiers.

The Magic Cauldron: Enchanted Brew plays out on the 7 x 7 grid shown above and you task is to land clusters of at least five matching symbols horizontally and/or vertically – those symbols will then disappear and be replaced by more falling in from above and the process can continue.

The setting is a candle-lit lab in which potions line the shelves while a green mixture bubbles away in a pot on the left hand side.

The high value symbols are four potions in yellow, pink, blue and green while the lower values are glowing disks in purple, green , red and light blue. The book is the wild symbol.

Every time a winning combo is formed that number of symbols will be collected in the cauldron on the left hand side – when twenty five have been grabbed in a. single spin then one of the following four features will be activated:

On any spin all instances of a low value symbol can be surrounding by a blue glow – forming a combo with these symbols will leave behind two wild symbols to help things along.

This can occur after any non-winning spin and between four and eight wilds will be added to the reels.

The Magic Cauldron is exactly the kind of arcade slot we like with its multitude of bonus features and the tumbling reels/symbols collections which trigger those various bonuses; the theme works well to tie everything together and there are some top notch graphics and animations.

The Magic Cauldron: Enchanted Brew is a magic-themed arcade slot from Pragmatic Play with a cluster gameplay mechanic.

The Return To Player percentage for The Magic Cauldron: Enchanted Brew is 96.44%.

How To Win On The Magic Cauldron: Enchanted Brew?

Land at least five matching symbols connected horizontally and/or vertically. Trigger one of the features.

Where can I play The Magic Cauldron: Enchanted Brew?