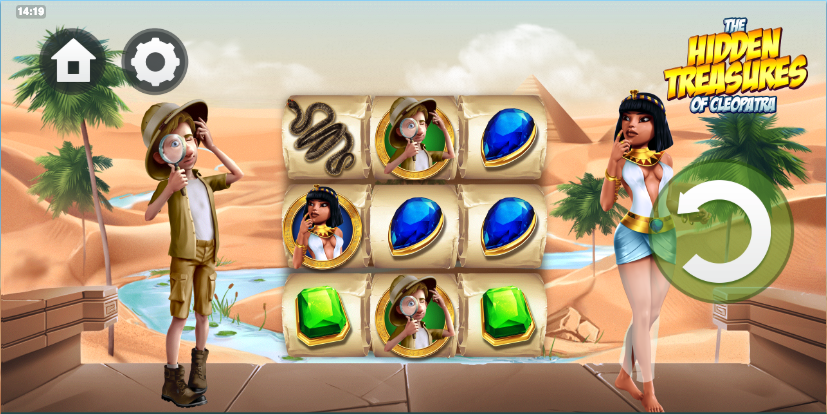 Ancient Egypt is the setting for this sunny online slot machine from Leander Game/Probability Jones; it’s called The Hidden Treasures of Cleopatra and behind its’ three reel facade it hides a large number of paylines and a lucrative treasure trail.

The Hidden Treasures of Cleopatra is a three reel slot with three rows and twenty seven paylines in the base game; a slightly baffled explorer stands to the left of those reels while Cleopatra is to the right and behind them is a sandy vista of trees, dunes and a meandering river.

The high value symbols include Cleo, the grave robber, the god Bastet and two feline statues; a snake and gems in red, green and blue make up the lower values.

The wild symbol is a scarab which will replace all others to help form winning combos except for the Free Spins scatter symbol.

The free spins can be triggered on the 5×5 reel and in one of the following ways:

Repeating this during the spins will award the same number of spins an unlimited number of times.

This is triggered by landing a spin with no scatter symbols when the reel is 5×5 size; this game involves spinning two compasses to help you move around the trail, picking up wins according to the symbol on which you land. Hitting the red segment on the first compass or landing on a space already visited ends the round.

The Hidden Treasures of Cleopatra may only have three reels but it offers a queen’s ransom in terms of bonus games and clever features; the expanding reels are an innovative touch and there’s a relatively high RTP of 96.86%.