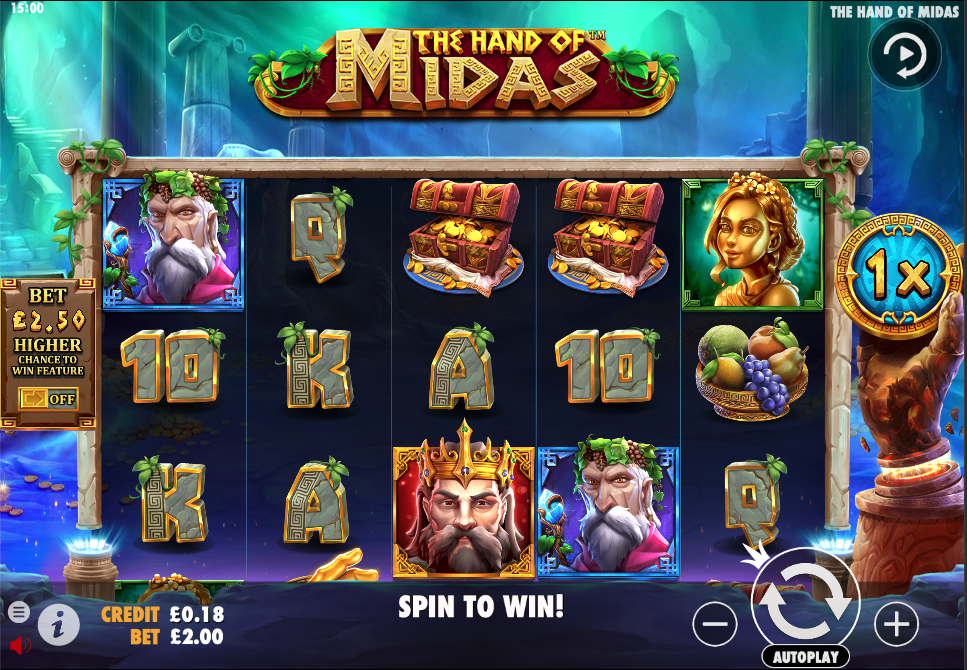 Most of us recognise Midas as the king with the ability (or curse) to turn everything he touched to gold but, as Wikipedia explains, there were various chaps called Midas in and outside Greek Mythology; The Hand of Midas is an online slot from Pragmatic Play themed on the gold creator and from £0.20 per spin it comes with wild multipliers and free spins.

The Hand of Midas is a five reel slot with three rows and twenty fixed paylines; those reels are framed in stone and placed inside a cavern lit by greenish light while a fiery hand props up the multiplier values on the right hand side.

High value symbols include King Midas, the chap with the white beard, the golden girl, the treasure chest, the bowl of fruit and the cup; 10, J, Q, K and A make up the lower values. The golden ‘W’ is wild, it appears on reels two, three and four and it will apply a multiplier of up to 3x to any wins – multiple wilds are added together. The golden hand is the scatter symbol.

The Hand Of Midas Bonus Features

Landing at least three of the golden hand scatter symbols anywhere in view will trigger this feature and the first thing to happen will be a spin of some mini-reels (the same number of triggering symbols) which will determine the number of free spins awarded (up to 27, 36 or 45).

Any wild symbol which lands on the reels will lock in place and increase the win multiplier by 1x, 2x or 3x at random. Triggering this feature with three, four or five scatters will guarantee a win of at least 10x, 20x or 30x the stake – if this doesn’t’ happen the round will retrigger.

There are two optional bets for those with a bigger budget:

Will The Hand of Midas result in a golden windfall for you? We can’t guarantee that but we can say that this slot is entertaining stuff with the big wins generally found inside the free spins round; buying your way into that feature gets you there quickly but may cost more than you’ll make.

The Hand Of Midas FAQs

The Hand of Midas is a fruit-themed five reel slot with three rows and twenty five paylines.

The Return To Player percentage for Diamond Blast Zone is 96.54%.

You can play The Hand of Midas at one of the three casinos listed above or just click the button below to head straight to one of our favourites.