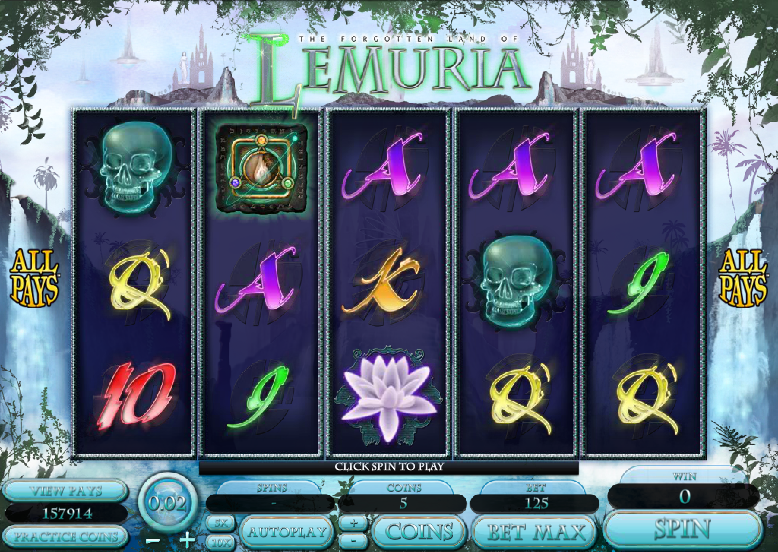 While most people have heard of the lost continent of Atlantis, far fewer will be aware of the island of Lemuria.  This is a wholly fictitious location usually placed in the Pacific or Indian Oceans and one which is based upon a now discredited theory of geological movement.  That’s the pseudo-science lesson over then and it’s Microgaming who have designed an online slot based upon this fantasy land.

As it’s a totally fictional place, the designers have been able to add whatever features they want to this slot and it certainly looks the part; it features five reels and an ‘All Pays’ payline layout and those reels are set against a background of waterfalls and floating castles which stretch off into the cloudy horizon.

The main symbols are a white flower, a crystal skull and a rock formation out of which are growing green crystals.  There’s the standard 9, 10, J, Q, K and A plus two bonus symbols which are a type of green elemental sign and the goddesses eye.  The elemental symbol is wild and the eye is the scatter symbols which triggers the bonus game. 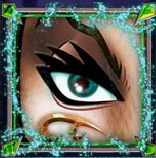 There are no free spins in this slot but instead we have an interactive game in which we move from one vault to another, trying to maximise our winnings along the way.  It’s activated by landing three of the eye scatter symbols anywhere on the reels.

You can see the feature in action in the video below; the game will begin with you in the Water Vault – the goddess is in the centre and you must pick the symbols around her to reveal prizes.  The trick is to pick as many prize symbols as you can before choosing the one which will take you to the next vault.

The subsequent vaults are the Earth and Fire vaults; there’s nowhere else to go after the Fire Vault so the alternative symbols will end the game.

This is one of Microgaming’s payline layouts and essentially it means that you’ll have a winning line if you can land matching symbols on adjacent reels from left to right.

We can’t offer too many tips for this slot except to say that there’s no particular strategy to picking the symbols in the bonus feature so don’t spend too much time contemplating your selections.

Lemuria has a nice mystical quality to it which is reflected in the shimmering graphics and the laid back soundtrack; the bonus feature seems to get triggered quite regularly, which is handy, so we’d recommend this slot for a mid-length diversion.