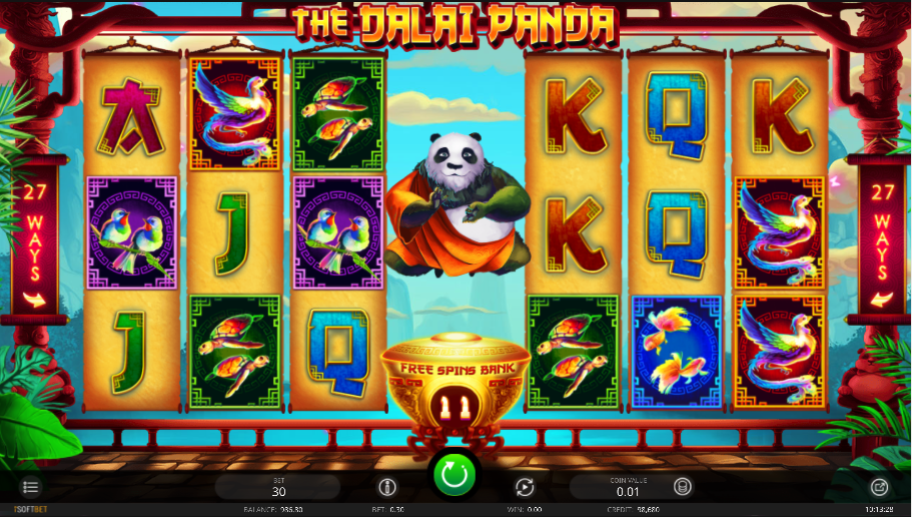 The mystical East is our destination now as we check out this ingenious online slot machine from iSoftBet; it’s called the Dalai Panda and our title character will dish out free spins and other spiritual features for your pleasure.

The Dalai Panda plays out on two sets of three reels, each with three rows and twenty seven ways to win; each reel is a banner hanging against a lofty view of mountain peaks and slowly drifting clouds while our eponymous hero floats in the centre. The paylines in the left set pay from left to right while those in the right set pay from right to left.

The five higher value symbols are all stylised animals and include birds, a monkey, turtles and Koi carp; J, Q, K and A make up the lower values.

The wild is a bamboo thicket which will replace all others to help form winning combinations except for the Yin Yang bonus symbol.

On any spin in the base game the Panda may take pity on you and pull the two reel sets together, creating 729 ways to win in both directions. He can also add random numbers of wild symbols onto the reels in the base game and free spins.

When you first load up the game you’ll see five free spins in the gold object below the reels – landing a win on both sets of reels in one spin will add an extra spin to that total.

The free spins round is triggered by landing at least three of the Yin Yang bonus symbols anywhere in view and those collected spins will be played on the pulled-together set of reels with 729 paylines.

The Dalai Panda has been good enough to bless us with an enjoyable and clever slot with some intricate graphics and engaging gameplay; there’s an appropriately oriental soundtrack and an RTP of 95.81%.