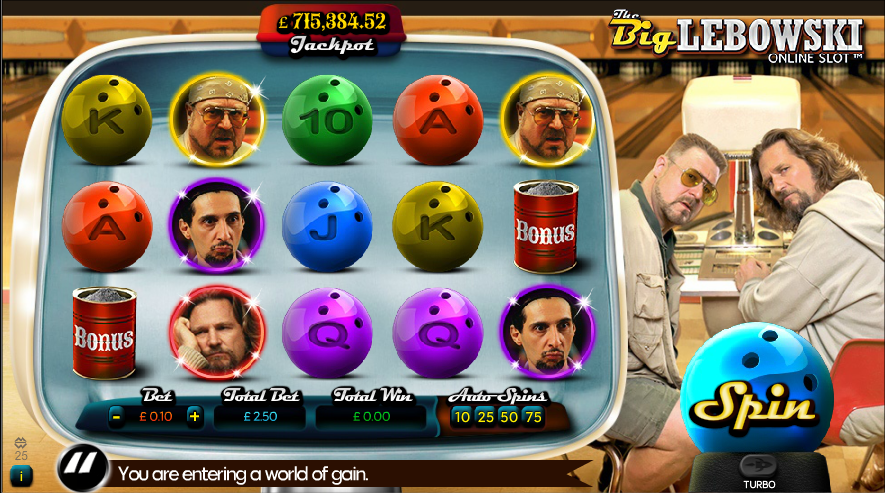 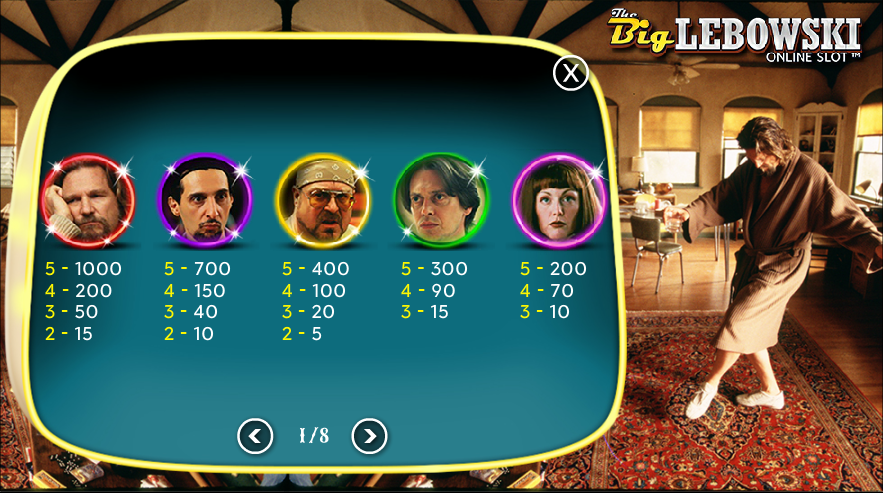 Film fans of above average taste will remember The Big Lebowski as an enduring classic starring Jeff Bridges as ‘The Dude’ alongside John Goodman and Julianne Moore. Thankfully it’s now also an online slot bearing the same name, developed by Random Logic and available to play at 888 Casino. It’s also includes a progressive jackpot and two bonus features so check out the full review below.

The Big Lebowski is a five reel slot with three rows and twenty five fixed paylines; much of the movie revolves around ten pin bowling and that’s where this game is set, accompanied by a twanging guitar soundtrack and notable quotes from the characters each time they contribute to a winning combo.

The wild symbol is The Dude’s old yellow car which substitutes for all others except the bonus – when it appears on reel three it will expand to fill all positions if a win is possible. The bonus symbol is a red tin can.

Continuing the bowling theme, on any reel spin which doesn’t result in a win you will receive a ‘spare’ free spin which gives you one more chance to land a prize. The low variance of this slot means that you won’t really win any more than normal but it’s a nice touch anyway.

This is a picking game triggered by landing the red tin can bonus symbols in the centre of reels one and five n the same spin. There are five items from which to pick, you choose one and you’ll win a multiplier of your stake up to 10x.

This is a randomly awarded prize and you can see the running total above the screen; however playing with a larger stake will offer a greater chance of landing the big bucks. It can’t be won on a ‘spare’ free spin.

The Big Lebowski is a nice tribute to the original film with lots of recognisable quotes, amusing graphics and plenty of swearing. We’d recommend it and it comes with an RTP of 94.47%.