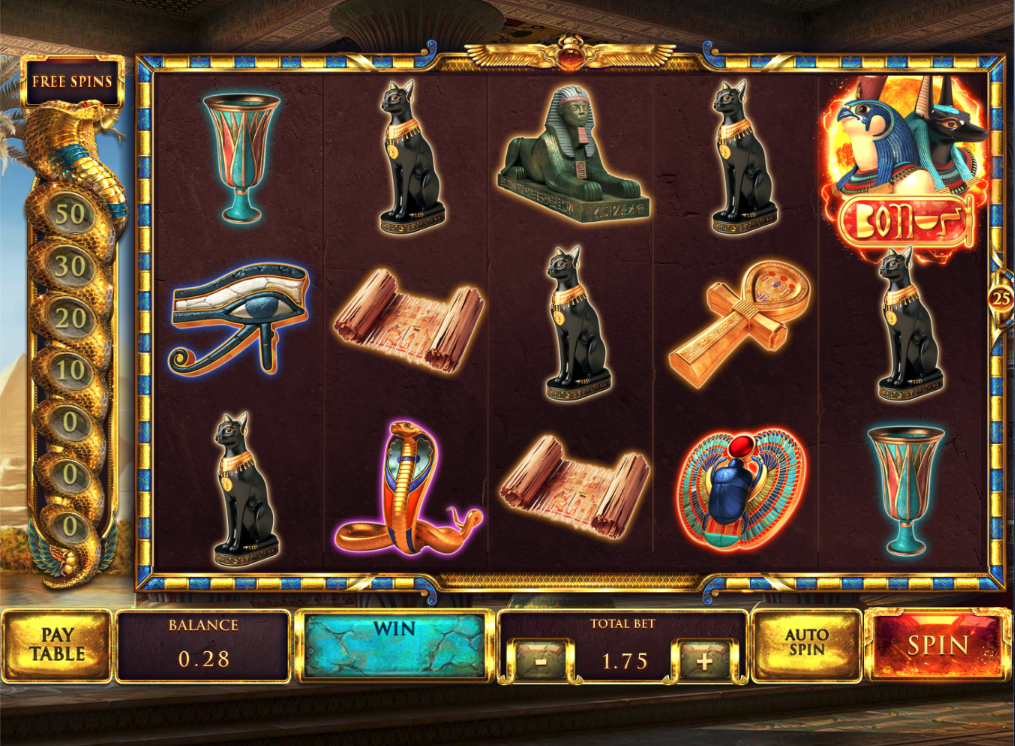 Cleopatra was the final ruler of Egypt before it fell into Roman hands and this online slot from Red Rake Gaming is a tribute to both her and the snake which, according to legend, killed her; it’s called The Asp of Cleopatra and from £0.25 per spin it offers free spins, the Wheel of Gods mini game and cascading reels.

The Asp of Cleopatra is a five reel slot with three rows and twenty five fixed paylines; all the action takes place inside Cleopatra’s palace while on the left hand side the asp coils up towards the ceiling, waiting to award up to fifty free spins.

All the symbols are related to the theme and include the asp, the golden ankh, the scarab beetle, a statue of Bastet, the Sphinx,, the Eye of Ra, a scroll and a cup; Cleopatra is wild and she’ll replace everything except for the Bonus symbol.

The Asp Of Cleopatra Bonus Features

Every symbol which is apart of a winning combination will disappear and allow more to fall in from above – more combos can then be made to continue the feature.

Each consecutive cascade fills up one of the sections of the asp on the left hand side and you can see that four cascades in a row will reach ten free spins; five, six or seven cascades will increase the number of spins to twenty, thirty and fifty respectively. Once the free spins start more spins can be won up to a maximum of one thousand spins.

Landing at least three of the Bonus symbols anywhere in view will kick this feature off and you’ll get to spin a wheel which contains red and blue segments – choose a colour to start with and if you’re correct you’ll get another spin. Each segment contains a multiplier value which will be applied to your stake.

Cleopatra features in a number of online slots but this is one of the more entertaining – cascading reels and a bonus wheel mean that there’s always something going on and we like the way the free spins are triggered consecutive wins.