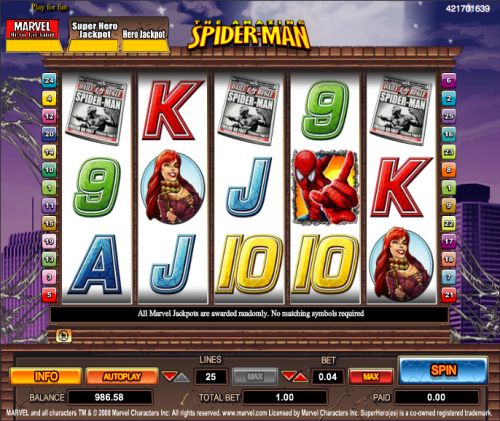 Superheroes and online slot machines always make a good fit and The Amazing Spiderman by Cryptologic maintains a tradition by this company of producing fine games based on Marvel comics characters.

Spiderman is the story of Peter Parker, bitten by a radioactive spider and given fantastic spider-like powers of which no-one will need reminding.  There are five reels and twenty five paylines and this slot encompasses all aspects of Spiderman’s life; the lower value symbols are the standard 9, 10, J, Q, K and A but the higher value ones are all theme-related.  So we have a newspaper and camera (Parker is a reporter), Mary Jane and then spidermans enemy, Venom.  Spiderman himself is a wild symbol and the scatter symbol is the spiderman logo.

When you land the spiderman symbol on reels two and four you will trigger this bonus which turns all the symbols in view on reel three into wild symbols.  This usually means some big wins as you already have wilds on reels two and three.

There are two bonus games available and these are triggered by landing three or more spiderman scatter symbols anywhere on the reels.  You are then given a choice between the following options:

If Spiderman does find Venom then you’ll be rewarded with not just the cash but a nice cut scene where our hero defeats the enemy and rescues Mary Jane.

All Cryptologic‘s Marvel slots are connected to the Marvel Jackpot progressive network and you can see the totals of the Hero Jackpot, Super Hero Jackpot and Marvel Hero Jackpot ticking upwards in the top left hand corner.  By playing you’ll automatically be eligible to win but the more you stake, the better your chances.

The clear graphics and funky bonus features of this Marvel slot make this a distinctly playable game and the Marvel Jackpots are just the icing on the cake.  Tiny bets of £0.01 per payline are possible as are stakes of £100 with everything maxed out.