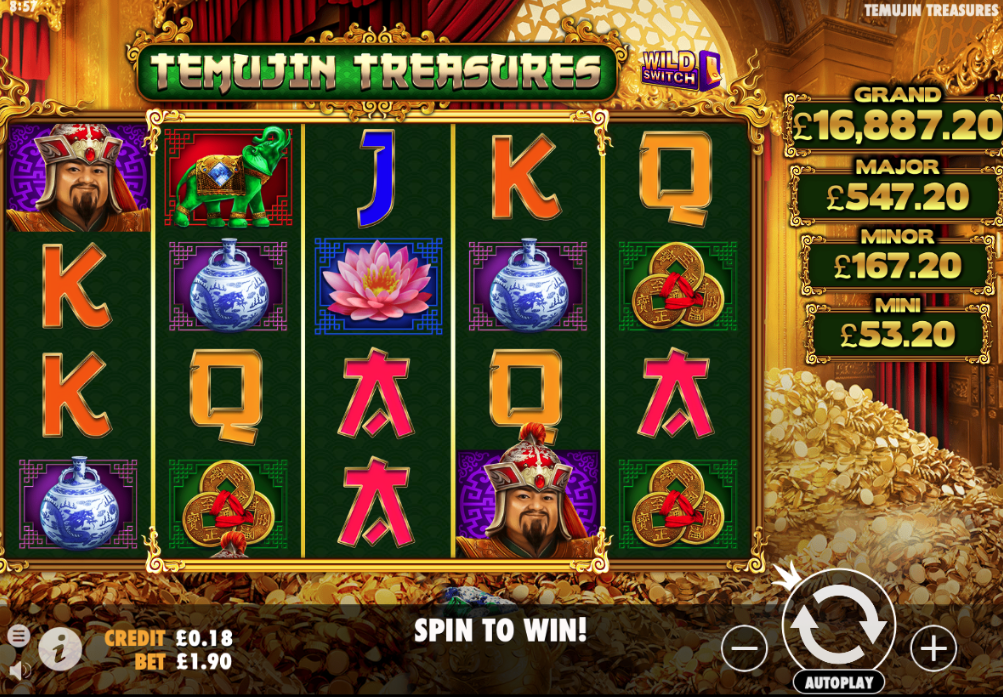 Scholars of Genghis Khan will be well aware that his name at birth in around 1158 was Temujin and he’s the subject of this online slot from Pragmatic Play/Wild Streak Gaming; it’s called Temujin Treasure and from £0.38 per spin it promises players a clever wild feature, free spins, cash prizes and four jackpots.

Temujin Treasures is a five reel slot with four rows and 1024 ways to win; the design is all about gold with those gold-framed reels floating inside a fabulous hall piled high with gold coins – presumably some of the loot gathered by the Mongol hordes as they rampaged west across Central Asia.

The theme-related symbols include Temujin himself, a jade elephant, a lily, a china vessel and some coins; 10, J, Q, K and A make up the lower values. The golden lion’s head is wild and it appears on reels two, three and four; the dragon mask and the firecrackers are the special symbols.

Reels two, three and four are contained within a gold frame and if you can land six matching symbols inside that frame they’ll all turn into wilds, potentially helping out with some nice wins.

Landing three of the dragon bonus symbols anywhere on reels two, three and four will award a spin of the Bonus Wheel which will reveal one of the following prizes;

The round ends if free spins are won (and the spins will then commence) but any other result will award another spin with increased cash values. On the sixth spin there are only free spins available to win and so the wheel bonus ends.

When the free spins are underway there’s a Firecracker symbol in play and when it lands on reels two, thee or four it will award one of these prizes:

We all like a bit of creativity in an online slot and we’ve got that here with the Wild Switch feature; chuck in a bit of historical context, loads of cash prizes and plenty of free spins and Temujin Treasures is definitely worth a slice of your bankroll.

Temujin Treasures is a history-themed video slot with five reels, four rows and 1024 ways to win.

Yes! The Wild Switch and the bonus wheel which awards cash prizes and free spins.

The Return To Player percentage for Gimme Gold! Megaways is 96.55%.

How To Win On Temujin Treasures?

Where can I play Temujin Treasures?